Copies of the 2018 presentations and reimbursement instructions can be found on the Mid-Atlantic Region III HTCs Annual Meeting page.

A national network of more than 130 Hemophilia Treatment Centers (HTCs) is supported and funded by the Maternal and Child Health Bureau (MCHB) of the Health Resources and Services Administration (HRSA). HTCs are specialized healthcare centers staffed by a team of doctors, nurses, social workers, physical therapists and other health professionals with expertise in hemophilia treatment.

HTCs nationwide are divided into eight regions, each of which is operated by a Core Center. The Core Centers also receive funding from the U.S. Centers for Disease Control and Prevention (CDC), administered by the American Hemostasis and Thrombosis Network (ATHN). This funding is distributed among the 130 HTCs to participate in surveillance to prevent complications of bleeding and clotting disorders.

The Mid-Atlantic Region III consists of 16 HTCs in Pennsylvania, Delaware, Maryland, Virginia, West Virginia and the District of Columbia. The Regional Core Center has been located at The Children’s Hospital of Philadelphia (CHOP) since 2009. The Core Center works to ensure that individuals with hemophilia and other bleeding disorders and their families have access to appropriate hematologic, genetic and other medical expertise and information in the context of a medical home model that provides family-centered, culturally sensitive, high quality and comprehensive care.

As a Core Center, CHOP oversees the services provided by the Mid-Atlantic Region III HTCs, and collaborates with the MCHB and CDC to improve treatment and support for people with hemophilia and other inherited bleeding and clotting disorders. Mid-Atlantic Region III HTCs are a valuable resource at the local, regional, and national level for information about bleeding disorders.

Mid-Atlantic Region III consists of HTCs in Pennsylvania, Delaware, Maryland, Virginia, West Virginia and the District of Columbia, which treat children and adults. The patient populations at these centers range in size from 100 to more than 400 patients.

The Children’s Hospital of Philadelphia (CHOP)

The Children’s Hospital of the King’s Daughters (CHKD)

The Mid-Atlantic Region III is one of eight HRSA regions and one of 10 CDC regions. We collaborate with the other regions on each grant by holding monthly conference calls and bi-annual in-person meetings. Each region represents the HTCs in their geographic area. The following are regions with a web presence. 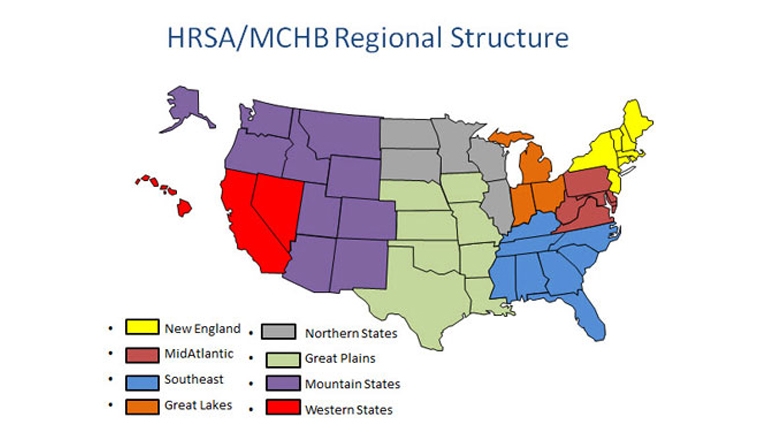