When Ayana was 7, she wrote a heartfelt letter for her mom’s birthday. She was only in kindergarten, but she described how her mother was her angel and her special person. She stood up at dinner and read it aloud. “It made me cry happy tears,” says her mother, Yolanda. “I framed it.” 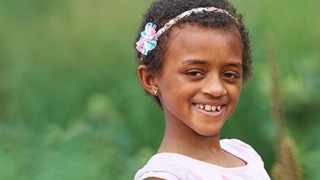 Ayana’s family has been particularly close-knit since April, 2014, when a persistent leg cramp led to the unexpected news that Ayana had neuroblastoma. While the Cancer Center team at the Children’s Hospital of Philadelphia is, in Ayana’s words, “doing their best to get the cancer out of me,” everyone has rallied around the beautiful little girl with the shy smile.

To make her Hospital visits more bearable, the Child Life team in the Cancer Center treats Ayana to games and arts and crafts.

After she returned home from a round of treatment, her parents took her to buy a beautiful pink bike with stars, and Ayana was so excited that she took a test ride around the store. They went on three trips this summer.

“We now truly, truly, appreciate the time that we spend together as family,” says Yolanda. “We appreciated it before, but my goodness, we appreciate it more.”

And all of her friends and family will be at the 2015 Parkway Run & Walk on Sept. 19, sporting pink Team Ayana T-shirts (pink is Ayana’s very favorite color). Ayana is serving as one of the Ambassadors for the event, sharing her story and helping to raise funds and awareness for pediatric cancer research and survivorship programs.

“Parkway Run means that we can gather as one with other families and have a moment of triumph in the name of what we’re fighting for,” says Ayana’s father, Reggie. “It gives us hope to continue fighting, and surely bringing all this love and karma together in one event is what we all need.”

Ayana, Reggie says, has been a wise guide to her whole family. “She would bring scripture to us from her Bible. She would write poems. She would give us pictures. She told us, she’s going to fight. And we told her that we will do everything to make sure that she makes it through.”

Ayana, now 12, has been done with treatment since January 2018, and she returns to the 2020 Parkway Run & Walk — which has gone virtual, due to the COVID-19 pandemic — as an Alumni Ambassador. She gets scans every six months at a New York hospital and comes to CHOP to be monitored for long-term side effects, but mostly she enjoys riding her bike and playing water sports. “I’m going to seventh grade and I’ve made honors every semester,” reports Ayana. “I am four years in remission and looking forward to celebrating my five-year anniversary on July 1, 2021, when I can actually say, ‘I am cancer free!’”