The word that best describes Jaxson, 2, is joyful. “He is a happy, fun, very active and extremely strong little boy.” says his mother, Diana. A brain tumor diagnosis hasn’t changed any of that. 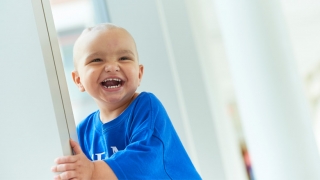 When he was 1, Jaxson started to drool excessively at night. He would wake up with his PJs soaked. Diana and her husband, Nicholas, were concerned. A few days and doctor visits later, Jaxson was admitted to a hospital in New Jersey, but doctors weren’t able to determine what, if anything, was the problem. One doctor did, however, mention the possibility that Jaxson was having seizures, a comment that lingered in his parents’ thoughts. On June 22, 2015, his bottom lip started twitching. Diana took a video of it, and she and Nicholas brought him to the Emergency Department at Children’s Hospital of Philadelphia.

“He was admitted in 13 minutes,” says Diana. A CAT scan revealed a cancerous mass in his brain. Two days later, Neurosurgeon Philip "Jay" B. Storm, MD, removed the tumor completely.

With a sample of Jaxson’s tumor, pathologists at Children’s Hospital were able to make a diagnosis: atypical teratoid rhabdoid tumor (ATRT). ATRT is a rare and aggressive form of malignant brain cancer found most often in young children.

ATRT was first distinguished as a unique tumor type by Children’s Hospital’s own Lucy Rourke-Adams, MD. Her discovery, made in the late 1990s, led to the development of intensified ATRT-specific treatment protocols, which improved outcomes for children with this type of brain cancer.

For Jaxson, that meant his brain surgery would be followed by a multimodal, intensive course of treatment. It was tough: six rounds of inpatient chemotherapy, 30 days of focal proton radiation, and 12 rounds of monthly maintenance chemotherapy, which should conclude by the end of 2016. Yet Jaxson has sailed through it. “He’s so comfortable at CHOP,” his mom says. “It’s not stressful. It’s like coming to see family.” Jaxson’s father laughs and adds, “Sometimes he doesn’t want to leave!”

His team, led by pediatric neurologist Mai Dang, MD, includes an experienced pediatric neurosurgeon who was able to safely remove the tumor; a pediatric radiation oncologist who understands the potential neurocognitive effects of radiation therapy on an infant’s brain; pediatric anesthesiologists who make it possible for a baby to undergo focal proton therapy every day for a month; and a team of pediatric neuro-oncologists who are not just treating children with ATRT every day, but studying new ways to treat the disease.

Seeing 2 1/2-year-old Jaxson today, you might not even realize he's being treated for cancer. He loves goofing around with his big brothers, Joey and Dominick, and watching them play baseball. After their games, he runs around the field with them. These days he can’t be in the sun for very long, which has curtailed his beloved outside play time, but he has plenty of company to keep him occupied: “His brothers, grandparents, cousins, aunts and uncles adore him and love spending time with him,” says Diana. The diagnosis and treatment sent the family into a whirlwind, but also brought them closer together.

Everything they’ve been through has made them see what others might take for granted — like blowing out candles on a birthday cake — as breakthrough moments. “Last year we didn’t know if Jaxson would celebrate his second birthday and where he would be,” says Diana. “We got to celebrate his second birthday with no evidence of disease. Walking, talking, happy, typical 2-year-old.”

There are currently no clinical trials available to Jaxson, or any other child newly diagnosed with ATRT. More funding for research could change that, by supporting the research required to better understand how this tumor works and identify new pathways for treatment. You can help kids like Jaxson by making a donation to the Pediatric Neuro-Oncology Program, part of the Center for Childhood Cancer Research at Children’s Hospital of Philadelphia, one of the nation’s leading pediatric brain tumor treatment centers. 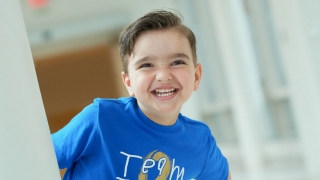 Jaxson successfully completed treatment at the end of 2016, and these days, the interval between his checkups at CHOP has grown to six months. “That’s good and bad for me,” says Diana. “There’s always anxiety.”

Five-year-old Jaxson enjoys playing video games — in particular, Plants vs. Zombies — and reading books. He loves the family’s pool, courtesy of the Make-A-Wish Foundation, and spending time at the beach. He’s looking forward to starting kindergarten. “It was hard at first for him to adjust to being around other kids,” explains Diana. “He’s spent so much time around adults.”

His brothers remain very protective of him, and the lingering effects of treatment mean he still needs sessions with physical, occupational and speech therapists. “He has some hearing loss, but they can’t get an accurate hearing test because he’s so young,” says Diana. “He seems to hear some things he shouldn’t hear, like birds chirping.”

The fact that four years has passed since he was diagnosed amazes his mom. “It’s surreal,” she says. “I can’t believe we did it, and I can’t believe where we’re at now.” One thing remains constant: the family’s determination to raise funds for pediatric brain tumor research, an area woefully underfunded.