When Kenzi bundled her 11-week-old daughter, Alivya, into the car late one afternoon outside their home in Portland, IN, she was hoping for a breakthrough. 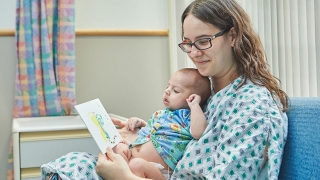 Twelve hours later, when she arrived at Children’s Hospital of Philadelphia (CHOP), she found one: A team at CHOP had an innovative plan to care for Alivya, who has Beckwith-Wiedemann syndrome (BWS), a rare genetic disorder characterized by overgrowth.

It was everything Kenzi and her husband, Andrew, had hoped for. “Coming to CHOP was the best decision we’ve ever made,” Kenzi says.

Kenzi and Andrew first heard about CHOP in a Facebook group for families whose children have BWS. Alivya was diagnosed with BWS soon after birth, and spent a month in the NICU of a local hospital. She had several of the characteristic features of BWS, including low blood sugar (hypoglycemia), a birthmark on her face (facial nevus simplex), creases on her earlobes, abdominal wall muscle weakness (diastasis recti), and an enlarged tongue (macroglossia), which caused her to develop obstructive sleep apnea and made feeding difficult.

The Baileys joined the Facebook group to get support from other families and to learn more about the best treatment options for Alivya. “Everyone was talking about CHOP,” Kenzi says. “It seemed like the go-to place.”

The couple spoke on the phone with CHOP Geneticist Jennifer Kalish, MD, PhD, who told them more about the hospital’s Beckwith-Wiedemann Syndrome Clinic and the services that CHOP provides for children with BWS.

A month later, Kenzi and Alivya were on their way to Philadelphia.

Multidisciplinary care at the BWS Clinic

When Kenzi and Alivya arrived at CHOP, they met with several members of the BWS Clinic team, including Dr. Kalish and Jesse Taylor, MD, Chief of the Division of Plastic, Reconstructive and Oral Surgery. The clinic team also includes orthodontists, speech pathologists, pulmonologists, feeding specialists, oncologists, endocrinologists and orthopedists, each of whom has special expertise caring for children with Beckwith-Wiedemann syndrome.

On Sept. 24, 2018, Alivya had surgery with Dr. Taylor to remove part of her tongue (a hemiglossectomy) so she could breathe and eat more easily. She spent the next 12 days in the Pediatric Intensive Care Unit (PICU), where she was sedated and placed on a ventilator while she recovered from surgery. It was a difficult time for the family, but Kenzi found ways to stay connected to Andrew and her two older children, Jathon, 4, and Alana, 3. “We sent a lot of silly pictures back and forth,” she says.

Alivya’s medical team also provided support, stopping by frequently to check on both Alivya and Kenzi. “Dr. Kalish and her whole team are amazing ― they would come in and sit down and talk with me,” Kenzi says. “And Dr. Taylor was extremely encouraging and understanding.”

Kenzi also remembers how well the PICU nurses cared for her daughter, especially Nicole Latchum, BSN, RN, who had a special connection with Alivya. “She would come in and pat her when she cried,” Kenzi remembers. “She did everything a mom would do to comfort a baby … I really appreciated that she was so maternal with her.”

During their time at CHOP, Kenzi met with Dr. Kalish and her team to learn more about Beckwith-Wiedemann syndrome. Alivya also had several tests, including an abdominal ultrasound to check for tumors (children with BWS are at an increased risk of several cancers).

Kenzi and Andrew also signed Alivya up for CHOP’s BWS Registry, which collects clinical data and samples that researchers can study to improve their understanding of BWS and develop better treatments. It is the only active Beckwith-Wiedemann syndrome registry in the world, and includes families from more than 40 states and 20 countries ― all of whom share the CHOP team’s commitment to addressing the many unanswered questions about BWS.

Alivya and Kenzi returned to Indiana in early October, and Alivya is thriving: She can drink from a bottle, and her breathing and sleep have improved. “She’s back to being a normal baby,” says Kenzi. “She’s started giggling, and she grabs everything around her. She’s constantly pulling my hair!”

Alivya will need ongoing follow-up care, including regular abdominal ultrasounds and blood tests to screen for cancer. She sees several specialists ― a feeding therapist, physical therapist, geneticist, urologist and cardiologist ― in Indiana, and may need heart surgery in the future to repair an atrial septal defect.

Once a year, or more often if needed, Alivya will return to CHOP to see Dr. Kalish and the other specialists in the BWS Clinic. Alivya’s parents are grateful for the support the team has provided, and the hope they have given their family.

“When we found out Alivya had BWS, I cried every single day. I cried until I thought I couldn’t cry anymore,” Kenzi says. But in the months since Alivya’s diagnosis, she says, her family has discovered just how resilient they are.

“I asked myself if we could do everything Alivya needed – and my answer to that was, ‘Of course we can,’" Kenzi says. "We’re still happy. We’re still a perfectly normal family. Alivya is strong – and so are we.”