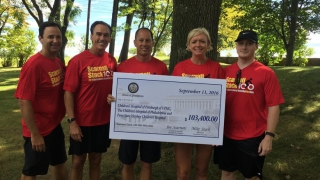 On behalf of the patients we serve, we would like to extend a sincere thank you to Senator Scarnati and his wife Amy, Lt. Gov. Stack, and to all of those who have supported the event in the last eight years by participating or donating.

If you have any questions about state or local government affairs issues affecting CHOP, please contact Jonathan Hood.