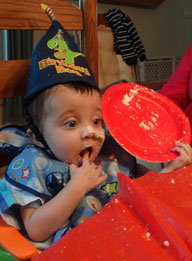 May 12, 2013 — As a baby, Jonathan Ryan was diagnosed with biliary atresia, a rare liver disease that in most cases requires a liver transplant. After an initial procedure that can help delay transplant, sometimes for a few years, Jonathan experienced difficulty growing. In late 2012, the Ryan family traveled from Florida to meet with doctors at The Children’s Hospital of Philadelphia who specialize in biliary atresia and liver transplant.

Jonathan’s dad Kevin wanted to be a living donor, so that he could give a portion of his liver to replace his son’s. While in Philadelphia, Jonathan’s health deteriorated and Kevin was tested. He was a match, and in mid-March 2013, Jonathan received the “gift of life” from his dad. Two months later, he celebrated his first birthday with a new, healthy liver thanks to his dad.

Watch the segment on 6 ABC News.