The era of fetal intervention has arrived in congenital heart care, but does performing prenatal catheter-based intervention on fetuses with aortic stenosis provide advantages over current postnatal treatments? One expert argues that it’s still too early to tell. 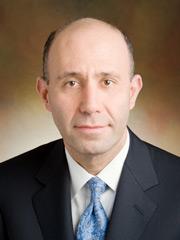 “Innovative fetal intervention may prove to be a game-changer in many cases, but it is too soon to declare its superiority over current conventional strategies for management of hypoplastic left heart syndrome,” says Jack Rychik, MD, director of the Fetal Heart Program at The Children’s Hospital of Philadelphia (CHOP). Rychik wrote an editorial commentary on this topic in response to a report on outcomes following fetal aortic valvuloplasty in the August 19 issue of Circulation, the journal of the American Heart Association.

The left side has the job of pumping oxygenated blood into the aorta, the large artery that carries blood to the body. In a child with HLHS the mitral valve, which separates the two left chambers of the heart, is too small or completely closed, the left ventricle absent is very small, and the aortic valve, which separates the left ventricle and the aorta, is too small or completely closed.

The current management of babies with HLHS is a three-staged set of complex surgeries, culminating in the Fontan procedure. At completion of the surgeries, the child is left with only half of a heart. It offers the chance at survival, a modern-day miracle compared to the situation just two decades ago, when HLHS was almost universally fatal. Nonetheless, mortality from HLHS remains high among all treatable forms of CHD. Only two of three babies born with HLHS survive to the completion of the third stage of surgery. Furthermore, amongst survivors, long-term complications affecting organ function are being identified with increasing frequency.

An important factor contributing to the gains in survival rates in HLHS compared to 20 years ago is the capability of detecting the heart defect using prenatal ultrasound and the evolution of programs such as the Fetal Heart Program at CHOP, which brings together a multidisciplinary team to counsel and provide care for the mother carrying a baby with HLHS. CHOP houses the Garbose Family Special Delivery Unit, the first facility dedicated to healthy mothers delivering babies with known birth defects.

An emerging new strategy for a subset of patients with HLHS is fetal aortic valvuloplasty. In this procedure the aortic valve is opened before birth in order to allow for increased blood flow and potential growth of the left ventricle. The procedure is appropriate for only a select group of fetuses that fulfill specific anatomical and physiological criteria that might predict a successful recruitment of the left side of the heart. Rychik’ s journal commentary analyzes research findings in the same issue of Circulation by a group from Boston Children’s Hospital, led by Dr. Lindsay Freud reporting on outcomes of the first 100 patients to undergo fetal aortic valvuloplasty at that center. Of those, 88 survived to birth and 38 achieved a bi-ventricular circulation. The 11 percent fetal mortality rate is notable, says Rychik, because in utero demise for HLHS is extremely rare and is not anticipated in the absence of a fetal intervention.

Furthermore, Rychik adds, after the fetal intervention “mortality is pushed out of the neonatal period into childhood.” Continuing complications, including impaired left-ventricle performance and pulmonary hypertension, may cause the risk of mortality to persist into childhood and early adolescence. He adds, “In comparison, after staged reconstructive surgery, mortality is quite low after completion of the Fontan operation.”

More time and experience, and much additional research, are needed to evaluate the benefits and risks of fetal aortic valvuloplasty in comparison to the current conventional postnatal strategy, adds Rychik. The need for improvement in long-term outcomes following the current Fontan strategy is great, however it is unclear if fetal aortic valvuloplasty is the solution. In addition, such procedures require immense resources and expertise in fetal diagnosis, obstetric and cardiovascular imaging, catheter techniques and maternal care. Few existing centers have the capability to do this effectively.

“Fetal aortic valvuloplasty is an innovative and important effort that should continue, but many more questions remain to be answered before we know the optimal strategy for management of HLHS in the rapidly advancing era of fetal diagnosis and treatment,” concludes Rychik.