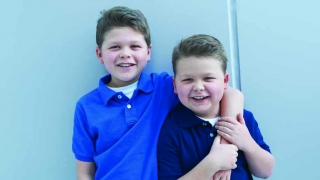 Anyone watching 10-year-old Niels Strautnieks zigzagging down a soccer field would never imagine that not long ago, he was often too tired to sit up. Niels has a chronic problem with the way his body makes and uses energy, causing him to suffer from diabetes, epilepsy, immune deficiency, and a host of other dangerous conditions that require a whopping 13 CHOP specialists to keep him healthy.

“When Niels was born, I knew by the second night that something was wrong. He was so incredibly uncomfortable and fussy,” his mother, Meredith Hardy, says. But Niels’ doctors in Charlotte, NC, dismissed Hardy’s concerns as colic or first-time parent jitters.

Niels had constant sinus infections, gastrointestinal problems, reflux and more. When his brother, Lachlan, now 7, showed the same weird symptoms — and his breathing troubles almost killed him — it was a wake-up call for Meredith and her husband, John Strautnieks: They needed help.

Hardy consulted several specialists, but none believed that Niels and Lachlan were seriously ill — the boys could be miserable and in pain one moment, happy and smiling the next. A friend gave Hardy a U.S. News & World Report survey ranking CHOP as the top pediatric hospital, and she thought it might be the answer to their prayers. Serendipitously, 10 days later, Strautnieks landed a job in Philadelphia. By the end of the month, the family had relocated.

“At CHOP, I was immediately listened to, in a way that went beyond anything I had experienced,” Hardy says. When Niels developed type 1 diabetes in kindergarten, the boys finally got a diagnosis: mitochondrial disease.

Mitochondria are the power plants of the body, tiny cellular structures that convert food and oxygen into energy. Douglas Wallace, PhD, director of CHOP’s Center for Mitochondrial and Epigenomic Medicine, is an internationally renowned renowned expert on mitochondria who has made the most important discoveries in the field.

When mitochondria don’t make enough energy for the body, the effects are catastrophic on multiple organs. More and more illnesses are being attributed to mitochondria, but so far what Niels and Lachlan have has never been seen before. “Strautnieks’ disease,” the family jokingly calls it.

The brain is the biggest consumer of energy in the body, and each boy has suffered from distressing neurological problems: Niels’ IQ dropped significantly from kindergarten to first grade, he began acting up, and he wasn’t able to read and write, while Lachlan also at times has lost the ability to speak.

One day Hardy noticed that after receiving a steroid to help him breathe, Niels’ intellect returned, so his doctor, neurologist Gihan Tennekoon, MBBS, MRCS, prescribed it to both boys long term. Although initially this was an unorthodox treatment, later they were diagnosed with a form of epilepsy that responds to steroids. The improvement was immediately apparent. Niels is back to being as smart, talkative and sarcastic as any fourth-grade boy. Lachlan can talk again, and he’s relearning reading and math.

“In medicine, you have to listen to the parents as much as anything else. That’s basically what my diagnosis and treatment plans rely on, because they see their kids every day,” says Tennekoon, who is still learning about the boys’ complex condition even while treating them.

Medication and infusions of immune-boosting antibodies have ended their monthly visits to the emergency room, and a “mito cocktail” of supplements, along with eating every two hours, maintains their energy so that Niels can be a soccer star and Lachlan — who once spent most of his day horizontal — can now boogie board and dig massive holes on the beach.

Mitochondrial disease is typically degenerative, and in Niels and Lachlan’s case no one knows how or when it will get worse. “They would be dead today if not for CHOP,” Hardy says. “We are not guaranteed tomorrow, ever, so our motto is we do what we can, when we can. And we make sure we laugh a lot.”

Visiting 13 specialists, some as often as six times a year, will be much easier when they are all in one building — the Buerger Center for Advanced Pediatric Care — and it will also facilitate communication among their doctors. The family is so looking forward to the opening of the Buerger Center that Niels is trying to raise $50 million for it. (He’s at $24,300 and counting!)

“The center means so much to me as a mom of two boys for whom time is precious, when every quality moment counts,” says Hardy.

Keeping Up with Niels and Lachlan

“Mito” isn’t slowing Niels and Lachlan down. Watch their home videos to understand what the brothers are up against and how they manage to keep playing soccer and boogie boarding. You can also check out more family videos and photos by visiting their Facebook page.

Philanthropic gifts are vital to making breakthrough stories like Niels and Lachlan's a reality. With your support, we can provide innovative care, pioneering treatments and lifesaving cures to more children — today, tomorrow, and for years to come.