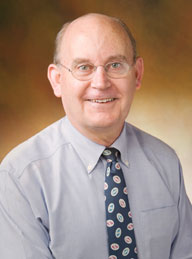 The Award and Lecture recognize “outstanding scientific work of major importance to the field of pediatric oncology” during the course of a career. Brodeur is an expert in neuroblastoma, the most common solid tumor of childhood.

March 15, 2013 — The American Society of Clinical Oncology (ASCO) today announced it will confer one of its highest awards on pediatric oncologist Garrett M. Brodeur, MD, of the Cancer Center at The Children’s Hospital of Philadelphia. Brodeur will receive the Pediatric Oncology Award and deliver the Pediatric Oncology Lecture on Friday, May 31, during the ASCO annual meeting in Chicago.

A cancer of the peripheral nervous system that typically appears as a tumor in a child’s abdomen or chest, neuroblastoma varies greatly in severity, ranging from forms that spontaneously disappear to high-risk subtypes that are difficult to cure. Because of this variability, researchers have sought ways to predict the course of disease in order to select the most appropriate treatment for each patient. The underlying assumption of this approach is that better understanding of the biology of this cancer will allow pediatric oncologists to avoid undertreating or overtreating a child.

Over his career, Brodeur has focused on identifying the genes, proteins and biological pathways that give rise to neuroblastoma and drive its clinical behavior. He also has built on this knowledge to develop more effective and less toxic treatments for children by targeting specific pathways.

His research first demonstrated in the 1980s that when neuroblastoma cells developed multiple copies of the MYCN gene, a process called amplification, a high-risk subtype of neuroblastoma occurs, necessitating more aggressive treatment. This discovery ushered in the current era of genomic analysis of tumors, both in adult and pediatric oncology. Profiling specific molecular alterations in a given patient’s tumor helps oncologists to predict that patient’s outcome and select the most appropriate treatment.

Another major focus of his research has concerned receptor tyrosine kinases, a family of signaling proteins that control the clinical behavior of neuroblastomas. His preclinical work led to a clinical trial with a novel drug that selectively blocks TRK signaling. He is now working on second-generation TRK inhibitors, as well as on nanoparticle delivery systems to treat patients more effectively, and with less toxicity.

Brodeur has been a member of the CHOP medical staff since 1993 and holds the Audrey E. Evans Endowed Chair in Pediatric Oncology at the Hospital. He also is a professor of Pediatrics in the Perelman School of Medicine at the University of Pennsylvania, where he is an associate director of the Abramson Cancer Center. Before arriving at CHOP, Brodeur did his fellowship in Pediatric Hematology-Oncology at St. Jude’s Children’s Research Center and a postdoctoral fellowship in Molecular Genetics at Washington University School of Medicine in St. Louis, where he remained until coming to CHOP.