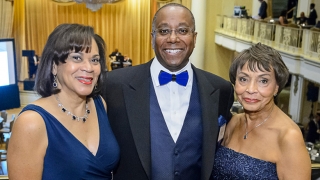 Held on October 17 at the Hyatt at the Bellevue, more than 300 donors, clinicians, families and friends of CHOP gathered for a glamorous evening of dinner and dancing, and to bid on more than 60 exciting silent auction items, including designer handbags, Philadelphia Eagles tickets and a cocktail party at The Logan, Philadelphia’s newest luxury hotel.

“The Comprehensive Sickle Cell Center at CHOP is one of the most advanced care and research centers for sickle cell disease in the nation,” said Madeline Bell, president and CEO at The Children’s Hospital of Philadelphia. “Since 2000, the Blue Tag Gala has raised more than $1 million to fund groundbreaking research and clinical support for children diagnosed with the disease. Today, we thank the hundreds who attended this year’s event and helped to make it a resounding success.”

“Over the years, the Blue Tag Gala has grown from a small, suburban brunch to a big-city, black-tie gala – raising more than $1 million for sickle cell disease research in the process,” said event co-chair Darlene Logan. “We are honored to play a role in planning the event and raising awareness of the phenomenal work spearheaded at CHOP’s Comprehensive Sickle Cell Center,” added Judith Royal, event co-chair.

Sickle cell disease is one of the most common hereditary blood disorders in the U.S. The disease is characterized by chronic anemia, pain and complications that can lead to stroke and organ damage. Current treatment for sickle cell disease includes frequent blood transfusions from donors who, ideally, have the same ethnic background as the patient. Blood donors can guarantee their donation goes to help a patient with sickle cell disease by asking that a “blue tag” be added to it. This blue tag notifies the American Red Cross testing lab that the donation should be matched to a patient with the disease.

The Blue Tag Gala is the largest recurring fundraiser for The Comprehensive Sickle Cell Center at CHOP. Over the past 15 years, the event has raised more than $1 million in support of sickle cell disease treatment, care and research. With sufficient philanthropic support, CHOP is just two years away from the first clinical trial of in utero stem cell transplantation, which would revolutionize treatment for sickle cell disease and other immunodeficiency disorders.