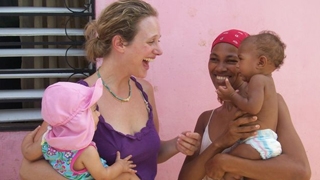 Human milk contains all the nutrients, vitamins and minerals that infants need to grow for the first six months of life. It also contains antibodies that help breastfed children combat illnesses and even enhances brain growth. Breastfeeding has many benefits for both mothers and babies, and, with the proper support, advice and encouragement, almost every mother can reach her personal breastfeeding goals.

However, a variety of social and cultural factors may affect a mother’s decisions about breastfeeding, including whether to breastfeed, how to breastfeed, and for how long. Lack of breastfeeding education is prevalent in many countries worldwide, particularly in developing countries. According to UNICEF, only 39 percent of children under 6 months in developing countries are exclusively breastfed. The Dominican Republic falls well below this — only 7 percent are exclusively breastfed during this key first six month window. This is the lowest rate in the Caribbean region and one of the lowest in the world. 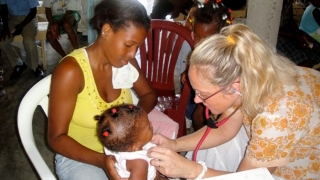 Children’s Hospital of Philadelphia (CHOP), alongside the Centro de Salud Divina Providencia (CSDP) in Consuelo, Dominican Republic, co-runs a program known as Niños Primeros en Salud (“Kids First in Health,” or NPS). The program was established in 2009 after local partners noted a gap in services to the pediatric population in the lowest-resourced areas of the town. CHOP’s Global Health Center stepped in to establish the program and helped the CSDP expand free care to children in Consuelo who needed it most. This primary and preventive health program for children ages 0-5 now serves approximately 450 children and their families.

In addition to the experienced and dedicated local staff at NPS, CHOP sends one Global Health fellow to Consuelo every two years to augment clinical capacity and to provide an early-career pediatrician with tools to work in a Global Health setting. The fellowship is supported by the Pincus Family Foundation. Soon after the NPS program was established, Lara Antkowiak, MD, then CHOP’s first David N. Pincus Global Health Fellow in the Dominican Republic, noted that most mothers in the program were not breastfeeding their babies, and instead favored formula.

Dr. Antkowiak, who was breastfeeding her own baby at the time, identified this as a key intervention to vastly improve NPS’ ability to help families prevent illness and promote health.

“We were seeing an unusually large number of young infants with malnutrition in clinic,” says Antkowiak. “When we visited the families in their homes and spoke with the mothers, I found that very poor families were using the little money they had to buy formula, mixing it with unclean water and diluting it in order to make it last longer.”

After further investigation, Dr. Antkowiak confirmed that most women faced significant cultural barriers to breastfeeding their children. Among them was formula advertising that leads many in the Dominican Republic to erroneously believe that formula is superior to human milk.

“Since the mothers could afford only a limited diet for themselves, they were convinced that their own breastmilk would not be as nutritious for their babies as the diluted commercial infant formula,” says Dr. Antkowiak. “It was heartbreaking.”

This inspired her to propose an intervention: Create a program to train community health workers to model the breastfeeding advice of the NPS program, educate their neighbors about the value of their own breastmilk, and empower them to breastfeed their children.

Dr. Antkowiak’s proposal evolved to what is today known as the NPS Community Health Promoters Program. The NPS community health promoters are a group of mothers with children under 5 years old who exemplify model health behavior, including exclusive breastfeeding. They work in the communities in which they live, making them trusted authorities as well as invested advocates for the health of their own communities.

There are now 10 health promoters working to encourage breastfeeding and a number of other health interventions in their communities, including nutrition, deworming and immunizations. They do this through regular home visits and ongoing health education.

“I have been able to teach a lot of good information not in advanced medical terms, but at a community level,” says Kika, a Community Health Promoter at NPS. “Using my own words and in common speech, I have been able to implement what I’ve learned in my community in a way that people can understand.”

CHOP is continuing to connect local breastfeeding experts with the NPS team to develop newer and more innovative ways to promote breastfeeding, with the aim to effect change on a more nationwide scale in the Dominican Republic. Today, with the help of Diane Spatz, PhD, RN-BC, FAAN, Director of the Breastfeeding and Lactation Program at CHOP, Clinical Coordinator of CHOP’s Mother’s Milk Bank, and Professor of Perinatal Nursing at the University of Pennsylvania, CHOP and NPS are teaming up to create stronger links with partner hospitals in the Dominican Republic. The goal is to determine the real challenges facing Dominican women in breastfeeding and identify effective interventions to promote breastfeeding worldwide.

On a recent visit to the Dominican Republic, Dr. Spatz presented to staff at four hospitals about best practices in teaching mothers and families about breastfeeding, and how healthcare workers can address common cultural misconceptions about breastfeeding with their patients and families. She also met with UNICEF leaders to discuss potential strategies to promote breastfeeding in the Dominican Republic through a baby-friendly certification program for hospitals.

The hope is that the collaboration between Dr. Spatz and partners in the Dominican Republic, and continued expansion of the health promoter model, will lead to a future in which many more women in the Dominican Republic will choose to breastfeed their babies. Under Dr. Spatz’s expert guidance, CHOP Global Health will be developing an intervention with measurable outcomes and tracking the changes in breastfeeding over the course of the next two to five years.

CHOP’s Global Health Center works in more than 15 countries around the world. Work like this saves children’s lives and cannot happen without the support of philanthropy. You can help CHOP implement high-impact, locally relevant global health solutions with a donation to our program.

Categories: In the Community, Global Health