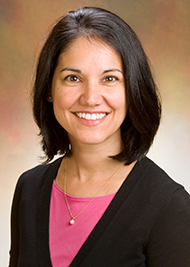 Sandra Amaral, MD, MHS January 17, 2014 — A new study from researchers at The Children’s Hospital of Philadelphia (CHOP) and the Perelman School of Medicine at the University of Pennsylvania has revealed large geographic variation in waiting times for children across the United States in need of kidney transplants, with differences due mainly to local supply and demand.

The findings, which will appear in an upcoming issue of the Journal of the American Society of Nephrology (JASN), suggest that broader geographic sharing of kidneys for children should be considered.

Kidneys are distributed to transplant recipients first locally within nearby geographic areas, and then regionally and nationally based on a pre-defined allocation system. Although children receive priority for kidneys from deceased donors who are less than 35 years of age, there are several categories of candidates that supersede children on the waiting list.

Sandra Amaral, MD, MHS, co-director of the kidney transplant program at CHOP, and Peter Reese, MD, MSCE, assistant professor of Medicine and Epidemiology at Penn, led a team that examined whether local organ supply influences waiting times for children. They also sought to examine whether the allocation of organs to other higher priority candidates impacts waiting times for children on the waiting list for kidneys from a deceased donor.

The investigators did not find that differences in waiting times were driven by the distribution of organs to other higher priority candidates. Waiting times for children were, however, affected by the local supply of high-quality organs.

“Despite an allocation policy that provides preferential allocation to children, our study findings suggest that the current allocation system is failing children who have the misfortune of living in areas with the greatest organ shortage,” said Amaral. “These results should be considered when new approaches to reduce inequities in transplant access across the country are examined.”

Amaral is from both CHOP and Penn, as are study co-authors Peter L. Abt, MD, and Justine Shults, PhD. In addition to Reese, co-authors Hojun Hwang and Vishnu Potluri, MBBS, MPH, are from Penn.