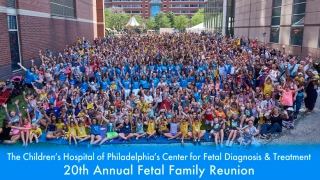 Over 1,800 people from 22 states came together June 26 at The Children’s Hospital of Philadelphia (CHOP) to celebrate the 20th annual Family Reunion hosted by the Hospital’s Center for Fetal Diagnosis and Treatment.

Each year, nearly 150,000 babies are born in the United States with birth defects, many with conditions so rare that most parents and even some clinicians have never heard of them. Too often, these families aren’t made aware of the treatments available at a place like The Children's Hospital of Philadelphia (CHOP) and they are left feeling overwhelmed, with few options.

The reunion brings together a unique community of families who have shared similar struggles. Nearly all of the children in attendance were prenatally diagnosed with a birth defect, such as spina bifida, congenital diaphragmatic hernia, or twin-twin transfusion syndrome, that had potentially devastating outcomes. Babies diagnosed with these birth defects before birth either underwent fetal surgery to treat the condition before birth or received highly complex care immediately after birth.

“The fetal family reunion is our team’s favorite day of the year,” said N. Scott Adzick, MD, surgeon-in-chief at Children’s Hospital and director of the Center for Fetal Diagnosis and Treatment. “The families gathered here today represent more than 18,000 expectant mothers from around the world to whom we’ve been able to offer hope and support since opening our Center in 1995.”

The Center for Fetal Diagnosis and Treatment at CHOP is a pioneer in the field of fetal medicine, and is one of only a few programs worldwide to offer comprehensive prenatal diagnosis, fetal surgery and therapy, and the option of delivering at a leading pediatric hospital. The Center was also the focus of a three-part documentary series called “Twice Born: Stories from the Special Delivery Unit,” that aired on PBS in 2015.

“Since our first reunion in 1997, attendance has grown from just 10 families to over 350 at today’s event,” said Lori J. Howell, DNP, RN, MSN, executive director of the Center for Fetal Diagnosis and Treatment. “Having known these children and teenagers since before they were born, watching them grow up into amazing young men and woman is truly remarkable.”

Each week at CHOP, highly sophisticated surgical teams repair spina bifida and other birth defects in the womb, place fetal shunts to treat life-threatening congenital conditions, or perform minimally invasive procedures in the mother’s uterus to treat complications in fetal twins. Of approximately 5,000 fetal surgeries done worldwide, a quarter of them have been performed at CHOP, more than at any other hospital. The Center staff has also managed thousands of pregnancies complicated by birth defects in which newborns need immediate specialized medical care or surgery after delivery.

Meet some of our fetal surgery patients

After having twins, Kelly and Dan of Cleveland, Ohio, were hoping their second pregnancy would be a little more low-key. But at their 20-week ultrasound, the couple learned that their unborn daughter, Maeve, had a sacrococcygeal teratoma (SCT), a tumor located at the base of her tailbone. Before she was born, doctors at CHOP performed fetal surgery to remove the huge tumor.
Read Maeve’s story.

Five-year-old identical twins Stella and Olivia are full of giggles. They delight in the fact that people have a hard time telling them apart. But before the girls were born, there was a very significant difference that meant a life or death situation for one or both of the twins: twin-twin transfusion syndrome (TTTS). While still in their mother’s womb, the girls underwent fetoscopic selective laser ablation, a procedure in which the Center’s skilled surgeons used a special laser to disconnect the shared blood vessels between the twins with the hope of halting the progression of TTTS.
Watch their story.

In early September 2000, 21 weeks into their first pregnancy, Mike and Katherine Mulligan of Cincinnati, OH, went for their first ultrasound. They were both excited, expecting to hear only good news.  Instead, they learned that their unborn baby was diagnosed with myelomeningocele (MMC), the most severe form of spina bifida, a condition in which part of the spinal column doesn’t close around the spinal cord, exposing it to damage during fetal development. Sean underwent a complex fetal surgery, where surgeons repaired the opening in her spine before birth. Read Sean’s story.

“It is truly inspiring to see so many children, who as babies likely could have died, now running around and growing up healthy and strong,” said Adzick, “and as the field of fetal surgery and therapy continues to advance, we look forward to treating more and more babies.”

Watch the video to see highlights from the day.