CHOP Lends Support to the "Last Mile" of Polio Eradication 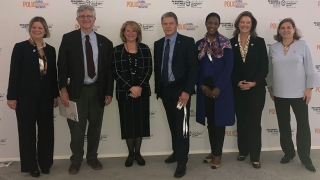 This event brought together more than 250 global leaders to tackle issues central to infectious disease eradication, highlighting CHOP’s innovation and the importance of philanthropy.  CHOP’s Dr Paul Offit, a leader in vaccine discovery and advocacy, as well as inventor of the Rotovirus vaccine, was a featured speaker at the event, which celebrated the launch of a new Global Health Fund Initiative (GLIDE), to help stem the ravages of infectious disease worldwide. The event raised $2.6 billion was raised for polio eradication.

In other trip highlights, Bell and members of our team attended  a small gathering with His Highness at his Palace, where the Vatican signed a deal to work with the UAE on global health issues.

While in the UAE, members of the CHOP team met also with several grateful families, including the HE Eassa Al Mheiri family, who had many wonderful things to say about CHOP.