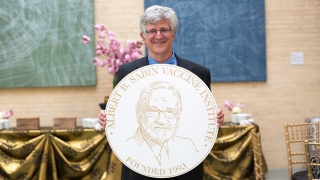 The Sabin Vaccine Institute has awarded Paul Offit, MD, of Children’s Hospital of Philadelphia (CHOP), the 2018 Albert B. Sabin Gold Medal. Sabin recognized Dr. Offit as co-inventor of an oral rotavirus vaccine and for his leadership as one of the United States’ most vocal and dedicated advocates for immunization.

Starting in the 1980s, Dr. Offit performed early research on rotavirus alongside Dr. H. Fred Clark and Dr. Stanley Plotkin. This work led to the invention of RotaTeq®, an oral vaccine that prevents rotavirus diarrhea, the most common cause of diarrheal hospitalizations and deaths among children worldwide. Since then, RotaTeq® has saved thousands of children’s lives. In 2008, the vaccine became the first oral rotavirus vaccine to be prequalified by the World Health Organization (WHO). Within a decade of the vaccine’s introduction in the United States, child hospitalizations from rotavirus dropped by 85 percent.