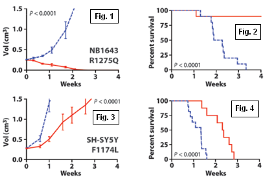 Studies in mice illustrate how human mutations in the ALK gene affect response to crizotinib. November 9, 2011 — By studying tumor biology at the molecular level, researchers are gaining a deeper understanding of drug resistance — and how to avoid it by designing pediatric cancer treatments tailored to specific mutations in a child’s DNA. In a fruitful collaboration, pediatric oncologists and biochemists are targeting neuroblastoma, an often-deadly childhood cancer of the peripheral nervous system.

“This scientific study allows us to move ahead in improving drug treatments for children with a particular form of neuroblastoma,” said study co-leader Yaël P. Mossé, MD, a pediatric oncologist at The Children’s Hospital of Philadelphia. Mossé teamed up in this research with the study co-leader, Mark A. Lemmon, PhD, professor and chair of Biochemistry and Biophysics at the Perelman School of Medicine of the University of Pennsylvania (Penn).

“This has been a terrific collaboration,” said Lemmon. “We have been working for a long time to understand how growth factor receptors work as signaling ‘machines.’ With the Mossé group, we focused on how control of these receptors is compromised in cancer, and can use the laboratory results to guide directly where to go next in the clinic.”

The study appears today in the Nov. 9 issue of Science Translational Medicine.

In neuroblastoma, the most common solid cancer of early childhood, roughly 10 percent of patients have mutations in ALK, the gene carrying the code for the signaling receptor anaplastic lymphoma kinase. Mossé, who led a team that discovered this gene’s role in 2008, was able to expedite a pediatric clinical trial based on this finding within a year, because an existing ALK inhibitor called crizotinib was already in adult clinical trials for a subset of non-small cell lung cancer patients.

Crizotinib was therefore available for use in a pediatric clinical trial against neuroblastoma, but early results in adult cancers showed that tumors sometimes develop resistance to the drug. The current study combined basic biochemistry and structural biology with studies in tumor-derived cell lines and animal models to investigate how different ALK mutations in neuroblastoma affect how ALK activity and tumor growth respond to crizotinib.

The reason for the different results, say the authors, is that the drug-resistant mutation causes ALK to bind more tightly to a key cellular compound called ATP that drives its signaling. Since crizotinib must displace this compound to inhibit ALK, the increased ATP binding caused by the resistant mutation reduces crizotinib’s effectiveness.

The resistance to crizotinib can be overcome

The authors say these results justify increasing the dosage of crizotinib in patients with the more drug-resistant mutation, although human studies must first be performed to determine if a higher dose will be safe and effective in children. Fortunately, said Mossé, unlike conventional chemotherapy, which attacks both cancerous and normal cells, this type of drug strikes much more specific targets, and tends to have lower risk of overall toxicity.

“This study shows how important it is to integrate basic science into the design of clinical trials, and how useful it can be,” Mossé added. “If we can better individualize treatment to a child’s genetic profile by understanding the effects of mutations on protein structure and function, we may achieve better results for patients,” added Lemmon.

The National Institutes of Health provided funding support for the study, as did the U.S. Army Peer-Reviewed Medical Research Program, the Carly Hillman Fund, the Alex’s Lemonade Stand Foundation, the St. Baldrick’s Foundation, and the Abramson Family Cancer Research Institute. The first authors of the study were Scott C. Bresler, an MD, PhD student at the Perelman School of Medicine at Penn, and Andrew C. Wood, MD, of Children’s Hospital.