On the heels of testifying before the Philadelphia City Council and hosting U.S. Sen. Bob Casey, Jr. (D-PA) for a roundtable discussion on lead exposure in children, CHOP recently hosted the Pennsylvania Senate Democratic Policy Committee for a state hearing on the public health effects of lead exposure in Pennsylvania. 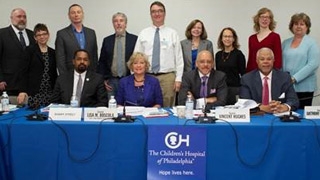 Kevin Osterhoudt, MD, and Marsha Gerdes, PhD, along with city and state officials and leaders from the Philadelphia Federation of Teachers, Public Citizens for Children and Youth, and the Education Law Center, testified about the long-term effects of lead exposure and the importance of prevention. During the discussion, experts agreed that Pennsylvania’s primary source of lead contamination and exposure is in lead-based paint in old homes and schools — not in water — as is the case in Flint, MI.