The Ray E. Helfer Society, an international organization dedicated to treating and preventing child abuse, presented its highest honor to Cindy Christian, MD, a pediatrician at The Children's Hospital of Philadelphia. 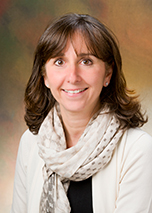 “As the chair of Child Abuse and Neglect Prevention at CHOP, Dr. Christian, has exemplified what it means to be an outstanding clinician, researcher, teacher and advocate,” said Louis Bell, MD, chief of the Division of General Pediatrics. “Her work as a member of many institutional, city, state and national committees and task forces has done much to improve society’s response to child abuse and neglect.”

She developed and then brought to individual doctors’ offices an educational program to help “front line” healthcare providers recognize and respond effectively to child abuse and neglect cases. She co-edited, with Robert M. Reece, MD, the 3rd edition of the classic text Child Abuse: Medical Diagnosis and Management.

A member of the CHOP medical staff since 1989, Dr. Christian also serves as professor of Pediatrics at The Perelman School of Medicine at the University of Pennsylvania. She has published and lectured widely on a variety of topics, notably abusive head trauma, biomechanics of injury, bone fractures, sexual abuse and poisoning, and has also made significant additions to the knowledge base of child maltreatment prevention.

Dr. Christian has received numerous awards and honors including the Christian R. and Mary F. Lindback Award for Distinguished Teaching at The University of Pennsylvania and the Pediatrician of the Year Award from the Pennsylvania chapter of the American Academy of Pediatrics. She has also been named to the CHOP Faculty Teaching Honor Roll multiple times.