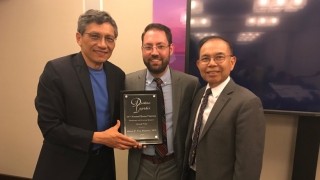 Jason Van Batavia, MD, of Children’s Hospital of Philadelphia (CHOP), was selected as the Grand Prize Winner of the Diokno-Lapides Essay Contest for his breakthrough research on urodynamics and neurology that identified pathways in the brain associated with voiding function and dysfunction. He was honored at a special event during the American Urological Association 2018 Annual Meeting held in San Francisco.

The annual award is given to someone conducting basic, clinical or translation research in neuro-urology, urodynamics or voiding dysfunction. The award has been given out every year since 1984 and is considered the most prestigious urology prize in the world.

“In a very short period of time, Dr. Van Batavia has established himself as a pioneer in the field of pediatric urology, utilizing a combination of his clinical background and neurological research techniques to provide a deeper understanding into what causes urological dysfunction,” said Douglas A. Canning, MD, Chief of Urology at CHOP.

Van Batavia’s research focuses on the connection between the brain and bladder function. Approximately 40 percent of CHOP’s urology patients report having lower urinary tract symptoms, including frequent trips to the bathroom or urine leakage during the day or night. Despite the frequency of these issues, Van Batavia said that there have not been many advancements in the field, which is why he wanted to approach a clinical problem through basic scientific research.

The study for which Van Batavia won the award focused on identifying specific neurological pathways associated with difficulty in emptying the bladder. Using a mouse model and optogenetics, a technique that involves using light to stimulate specific cells or neurons, Van Batavia and his colleagues found that corticotropin-releasing hormone (CRH) may play a critical role in bladder function. The receptors that regulate this hormone could become targets for future therapies designed to manage lower urinary tract dysfunction.

“Whenever there is success in science, it’s always a team effort,” said Van Batavia. “I’m honored to receive this award and be recognized for the role that a physician-scientist like myself can play in discovering the connections between urology and the brain, but I also want to thank my team of colleagues who helped make this research possible. I’d also especially like to thank my mentors Drs. Stephen Zderic and Rita Valentino for their guidance and encouragement.”

Dr. Van Batavia received his bachelor’s degree from Yale University in New Haven, CT, and his medical degree from Columbia University College of Physicians and Surgeons in New York. He completed a urology residency at Columbia and a urology fellowship at CHOP. The work that won this award was completed in his research year during fellowship and was in part funded by the Urology Care Foundation through a Research Scholar Award. In 2017, he remained at CHOP following his fellowship to become a clinical instructor in the Division of Urology and Department of Surgery.