Researchers from Children’s Hospital of Philadelphia (CHOP) have determined what happens at a cellular level as the lung alveolus forms and allows newborns to breathe air. Understanding this process gives researchers a better sense of how to develop therapies and potentially regenerate this critical tissue in the event of injury. The findings were published online today by the journal Science.

The lung develops during both embryonic and postnatal stages, during which lung tissue forms and a variety of cell types perform specific roles. During the transition from embryo to newborn is when the alveolar region of the lung refines its primary function of exchanging gas, which includes the critical process of ridding the body of carbon dioxide.

Despite these critical steps involved in the formation of the lung, little is known about what happens at a cellular and genomic level. Not only is the lung alveolar critical, it can also suffer damage caused by pathogens such as influenza and the SARS-CoV2 virus that causes COVID-19. Knowing which cells are involved in the formation of healthy lung tissue at birth may provide a basis for therapies that help regenerate this critical portion of the lung. 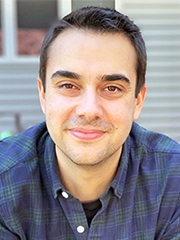 Jarod A. Zepp, PhD “Extensive morphological changes properly shape the alveolar niche, but prior to this study, the research community was unsure as to the extent of cellular signaling involved to promote its proper architecture,” said first author Jarod A. Zepp, PhD, a research faculty member of the Division of Pulmonary and Sleep Medicine at CHOP and an Assistant Professor at the Perelman School of Medicine at the University of Pennsylvania. “Recent advances in technology allowed us to assess the intracellular communication that drives the generation of this critical portion of the lung.”

The study team used a multimodal approach to investigate intercellular relationships that drive the formation of the alveolus. They discovered that alveolar type 1 (AT1) epithelial cells, which form the outer layer of the alveolus tissue, represent a signaling hub that coordinates cell development, especially during the transition to air breathing. They also traced the lineage of AT1 cells and show that they align with myofibroblasts, which are a special cell type involved in tissue remodeling. Finally, the researchers also demonstrated that AT1-restricted ligands, or secreted binding molecules, are required to form these myofibroblasts and the alveolus.

“Our study reveals the complexity of the cell-types and their extensive communication with one another as they form this critical part of the lung,” Zepp said. “This research provides us with vital clues on how we might be able to repair damaged tissue at a cellular level.”