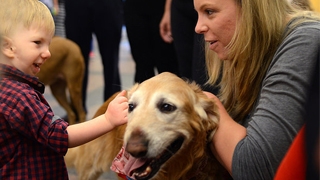 On Tuesday, Oct. 7, The Children’s Hospital of Philadelphia hosted the second annual “Best Friends Bash,” where craniofacial patients had the opportunity to meet dogs with similar conditions who were treated at Penn Vet’s Ryan Hospital.

This meaningful partnership between Penn Vet and CHOP helps children see how dogs are affected by similar problems and how they have adapted. During the event, CHOP patients interacted with Penn Vet patients as well as some members of the Gerald B. Schreiber Pet Therapy Program at CHOP.

The Best Friends Bash was funded by a grant from Penn’s Center for Human Appearance.