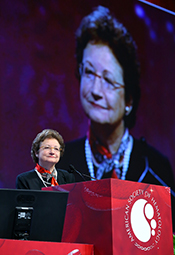 Dr High delivering the 2013 E. Donnall Thomas Lecture at ASH annual meeting on Dec. 9. December 16, 2013 — Katherine A. High, MD, of The Children’s Hospital of Philadelphia (CHOP) was honored for her trailblazing scientific and clinical research in the bleeding disorder hemophilia when she received the 2013 E. Donnall Thomas Prize from the American Society of Hematology (ASH) at its annual meeting on Dec. 9 in New Orleans.

Named for the late Nobel Prize laureate E. Donnall Thomas, the award recognizes pioneering research achievements in hematology that have helped move the field forward. An internationally recognized expert in the molecular basis of hemophilia, Dr. High has developed novel approaches to correcting hemophilia with gene therapy in studies over the past two decades. Her studies continue today in a current NIH-funded clinical trial for hemophilia.

The Prize recipient customarily delivers the E. Donnall Thomas Lecture to the ASH conference audience. Dr. High’s lecture, “Sailing to Ithaca: Gene Therapy’s Odyssey from Investigational Agent to Therapeutic Product,” described the successes and obstacles of the evolving science and practice of gene therapy as it pursues the goal of offering long-lasting treatments of previously incurable diseases.

In presenting the E. Donnall Thomas Prize, ASH president Janis L. Abkowitz, MD, said, “Dr. High is unquestionably a leader in gene therapy and has made remarkable, groundbreaking contributions to the field, demonstrating creativity, determination, and the ability to overcome numerous obstacles. Through her countless discoveries, Dr. High has transformed the notion of utilizing genetically engineered mechanisms for treatment of incurable inherited disorders from a distant vision to reality.”

Dr. High is the founder and director of the Center for Cellular and Molecular Therapeutics at The Children’s Hospital of Philadelphia. She also is a Howard Hughes Medical Institute Investigator, the William H. Bennett Professor of Pediatrics at the Perelman School of Medicine at the University of Pennsylvania, and an attending physician at CHOP. A former president of the American Society of Gene and Cell Therapy, she also is an elected member of both the Institute of Medicine and the American Academy of Arts and Sciences. She is a scientific co-founder and advisor to Spark Therapeutics, a fully integrated gene therapy company launched in October 2013 with a capital investment from CHOP.