The Combating Autism Act of 2006 was originally signed into law by President George W. Bush and was up for renewal in September 2014. The Act authorized research under the National Institutes of Health (NIH), authorized regional centers of excellence to collect and analyze data related to autism spectrum disorder, and authorized activities to increase public awareness about autism. Experts from The Children's Hospital of Philadelphia (CHOP) have been part of the advances in clinical care, research and training that stem from the Combating Autism Act and have witnessed the Act’s impact on those with autism and their families.

To demonstrate the Hospital’s support for the Act’s renewal and to share our work related to autism, CHOP hosted U.S. Rep. Mike Fitzpatrick (R-PA) and nine staffers representing eight different congressional offices in New Jersey and Pennsylvania to participate in an Autism Awareness Day on April 23, 2014, at CHOP.

The event included tours led by Judith Miller, PhD, and presentations about the Center for Autism Research (CAR), the Regional Autism Clinic (RAC), the Magnetoencephalography (MEG) Lab, the Leadership Education in Neurodevelopmental and Related Disabilities (LEND) program and CHOP Career Path. The main objective was to provide information about the impact of the Combating Autism Act on our region and Children’s Hospital. 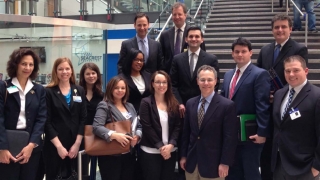