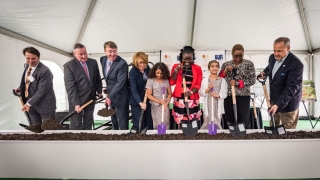 A resource for patient and community engagement programs

In the months leading up to the 2016 Democratic National Convention in July, credit unions and RealClearPolitics are working with the DNCC to create a space at CHOP’s Nicholas and Athena Karabots Pediatric Care Center that will serve as a resource for vitally important patient and community engagement programs, including nutritional experiences, physical activity and a site to host events for patient programs, such as Reach Out and Read.

Projects that live on after the Convention has concluded

“The Democratic National Convention Committee is committed to leaving a positive impact on the City of Philadelphia. Today we partnered with the Pennsylvania Credit Union Association, the Credit Union National Association and RealClearPolitics to take yet another step toward honoring that commitment,” said Rev. Leah D. Daughtry. “The Health and Wellness Garden will live on long after the Convention has concluded, I am overjoyed that our efforts will serve both CHOP patients, their families and members of the community for years to come.”

CUNA and RealClearPolitics are honoring the 2016 Democratic nominating convention by taking on the project. This year’s effort represents credit unions’ tradition of honoring each national political convention city with a “leave-behind” project that will serve the local communities long after the conventions have left town.

“The Health and Wellness Garden at our Nicholas and Athena Karabots Pediatric Care Center will be a wonderful resource for patient families and community members alike,” said Madeline Bell, president and CEO of The Children’s Hospital of Philadelphia. “We appreciate the ongoing support of local credit unions in helping to bring projects like these to fruition, and we look forward to joining members of the Pennsylvania Credit Union Association and the Democratic National Convention Committee in Philadelphia this summer as we break ground on this exciting initiative.”

“National convention leave behind projects are part of what makes the credit union difference so special and unique,” said Jim Nussle, President and CEO of CUNA. “Credit unions live by the philosophy of people helping people. That’s why we’ve dedicated our time and energy into leaving a long-lasting impact on communities like Philadelphia that have hosted conventions since 2000.”

“Credit unions from this region and beyond have been strong supporters of the Children’s Miracle Network,” stated Patrick Conway, President and CEO of the Pennsylvania Credit Union Association. “The Democratic National Convention shines the perfect spotlight on the great work that credit unions do cooperatively in their communities.”

The Pennsylvania Credit Union Association is spearheading the $300,000 fundraising effort to cover the costs of the project and is working with credit unions around Pennsylvania and across the country.

“Thanks to the credit unions and The Children’s Hospital of Philadelphia we have an opportunity to participate in something uplifting and important,” said Carl Cannon, executive editor and Washington bureau chief of RealClearPolitics. “It’s an honor to be part of this endeavor.”

Construction to occur throughout spring and summer 2016

Construction will unfold over the spring and summer, and will include volunteer opportunities for credit union employees, convention staff and those in the community to lend a helping hand.  Plans call for a ribbon-cutting event to take place during the week of the convention, which will be held July 25-28.  A companion project is being undertaken by credit unions at UH Rainbow Babies & Children’s Hospital in Cleveland, Ohio, site of the 2016 Republican National Convention.

RealClearPolitics is the trusted, non-partisan, convener in a content-rich media environment; thoughtfully curating the best coverage from every angle of the day's most critical issues. One of RCP’s most notable features — the RCP Poll Average — is the most cited source for U.S. political polling information. The RCP Poll Average provides a more accurate read on the status of the election. The accuracy of the RCP Poll Average is unmatched and trusted enough to be used in campaign communication documents, as well as being widely cited by hundreds of news organizations, including: The Wall Street Journal, New York Times, Financial Times, FOX News, CNN and USA Today. With a wide array of news and analysis available online, insiders rely on RealClearPolitics as the authoritative source for reporting, commentary, and analysis on all sides of the pressing public policy issues coming to the fore in 2016 — and the politics surrounding those issues heading into, and beyond, the election cycle.