S., an 8-year-old female, presented to Children's Hospital of Philadelphia's (CHOP) Division of Pulmonology for a second opinion with the chief complaint of an interstitial lung disease (ILD) of unknown etiology and a persistent dry cough for almost 3 years.

The child’s symptoms began as a loose cough, associated with fever and nasal congestion. She was diagnosed with pneumonia. The fever and congestion improved on antibiotics, but her cough persisted. She was referred to a local pulmonologist, diagnosed with asthma, and started on inhaled glucocorticoids. The cough persisted; she developed dyspnea on exertion, tachycardia, failure to thrive, and clubbing of the fingertips. Pulmonary function testing revealed a restrictive pattern.

She underwent an open lung biopsy. Pathologic findings were consistent with an interstitial lung disease, specifically with findings of interstitial lymphoplasmacytic inflammation, chronic lobular remodeling with mild interstitial fibrosis, increased alveolar macrophages, alveolar lymphocytes, and pulmonary arterial hypertrophy. The biopsy findings were felt to represent an immunologic disorder, either autoimmune or immunodeficiency related. Treatment was initiated with high-dose IV pulse methylprednisolone. Pulmonary function testing improved only marginally, and her symptoms would improve for a few days after pulse steroids, then return. She was referred to the Children’s Interstitial and Diffuse Lung Disease (chILD) Center at CHOP for further evaluation and management.

At CHOP, multiple sub-specialists evaluated S. in an effort to identify the underlying etiology of her ILD. Despite extensive evaluations by rheumatology, immunology, cardiology, and pulmonology, a specific etiology was not found. With pulse-dose steroids no longer working, multiple alternative immunomodulatory medications were trialed, including Imuran (azathioprine), Cytoxan (cyclophosphamide), Remicade (infliximab), and Gleevec (imatinib). Unfortunately, none slowed the progression of her respiratory decline. Having maximized medical therapy, she was evaluated and ultimately listed for lung transplant. 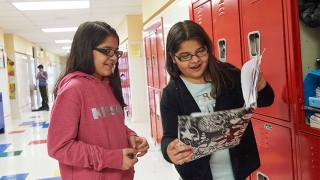 S., now 12, is back at school following a bilateral sequential lung transplant at CHOP. Her twin sister (left) is awaiting transplant. Doctors knew S. had an identical twin sister. However the parents always described the twin as “healthy.” CHOP pulmonologists suggested the twin be evaluated. Despite a normal physical examination, pulmonary function testing revealed a significant restrictive lung disease. A chest CT revealed diffuse ground-glass opacities and cysts with interlobular septal thickening and pleural thickening. Unfortunately, both twins were suffering from the same genetic lung disease, which an open lung biopsy confirmed.

S. eventually underwent successful bilateral sequential lung transplant and had an excellent outcome. She is off all respiratory support, is free of pulmonary hypertension, and is able to exercise and live a full life. Unfortunately, her twin’s clinical path is similar, and her sister is now awaiting a lung transplant.

chILD is a heterogeneous group of rare diffuse lung diseases characterized by impaired gas exchange and abnormalities on chest imaging. The interstitial lung diseases that affect neonates are different from those that affect older children, and all forms of chILD are distinct from ILD in adults.

A neonate or infant with diffuse lung disease is regarded as having “chILD syndrome” if they have at least three of the following four criteria:

In children 2 to 18 years of age, the pathologic spectrum of diffuse lung disease overlaps with that seen in adults, with some exceptions, but differs from that of infants. Specific etiologies in this age group include idiopathic pulmonary hemosiderosis, lymphangiomatosis, and opportunistic infections related to treatment (chemotherapy, radiation, drug hypersensitivity), or related to transplantation and rejection (GVHD, PTLD). The most common symptoms at presentation in this age group are cough, exercise intolerance, dyspnea, hypoxemia, crackles, and tachypnea.

There have been no controlled trials of any therapeutic interventions in chILD syndrome; therefore management is based on uncontrolled studies, case series, case reports, and unsystematic observations, as well as indirect evidence from other patient populations. Therefore, after common causes of diffuse lung disease have been excluded, infants and children with symptoms of chILD should be referred to a chILD specialist for further evaluation and treatment.

Contributed by: Maureen B. Josephson, DO