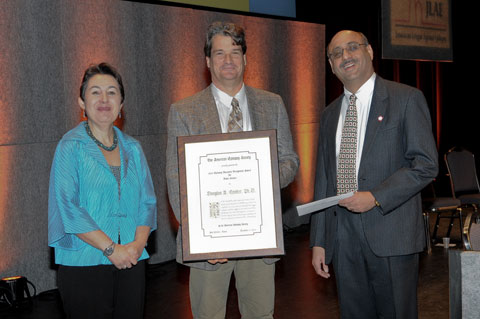 December 13, 2010 — Douglas A. Coulter, PhD, a neuroscientist at The Children’s Hospital of Philadelphia, received the 2010 Epilepsy Research Recognition Award for Basic Science from the American Epilepsy Society. The Society honored Dr. Coulter’s pioneering contributions to epilepsy research on Monday, Dec. 6 at its Annual Meeting in San Antonio.

Most prestigious awards for epilepsy research

Considered the most prestigious prizes for research in epilepsy, the Epilepsy Research Recognition Awards annually honor active scientists for professional excellence and distinguished research. One award recognizes a basic science investigator, the other a clinical investigator.

The Basic Science Award to Dr. Coulter acknowledges his “highly original and pioneering contributions to the understanding of altered brain cell and circuit function in the development of epilepsy.” He has studied a fundamental research question—how does an injury to neurons ultimately result in the recurrent seizures that characterize epilepsy?

Dr. Coulter has used a variety of approaches — physiological, anatomical and molecular — to study the development of epilepsy, both in animal models and in human brains. One technique he has developed in his laboratory is a high-speed imaging method that captures how molecular changes in individual brain cells influence the function of brain signaling networks.

Some of his most recent research has focused on abnormal changes in brain cells called astrocytes reduce inhibition signals in the brain, allowing uncontrolled firing among neurons to give rise to epileptic seizures.

Epilepsy affects an estimated 50 million people, 3 million of them in the United States. It is the third most common neurological disorder, after Alzheimer’s disease and stroke.

Dr. Coulter’s research has also included studying cellular activities of several anti-epileptic drugs. Coulter said, “The ultimate goal of our research is to help translate detailed knowledge of how epilepsy develops into better therapies for treating children and adults with epilepsy.”

Dr. Coulter is an investigator at The Children’s Hospital of Philadelphia Research Institute. He also is a professor of Pediatrics and Neuroscience at the University of Pennsylvania School of Medicine, where he directs the University’s Center for Dynamic Imaging of Neuronal Function. He has received a Javits Neuroscience Investigator Award of the National Institute of Neurological Disorders and Stroke (NINDS), and was Chair of the second Gordon Research Conference on Epilepsy.

He is active in many educational and scientific activities of the American Epilepsy Society, and has served as an editor of the journals Epilepsy Currents, Epilepsy Research, and Epilepsia, among other publications. He is also a standing member of an NINDS study section.