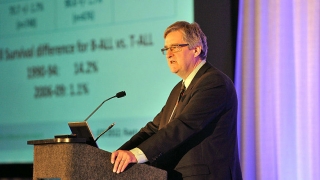 Stephen P. Hunger, MD, Chief of the Division of Oncology and Director for the Center for Childhood Cancer Research at Children’s Hospital of Philadelphia, has been awarded the 2018 esteemed George R. Buchanan Lectureship Award given by the American Society of Pediatric Hematology/Oncology (ASPHO).

As a clinician scientist, Dr. Hunger has pioneered translational discoveries in pediatric hematology/oncology, specifically in the field of pediatric leukemia and the most common form of childhood leukemia, acute lymphoblastic leukemia (ALL).

The award, which recognizes an expert in pediatric hematology/oncology with significant research, education and clinical expertise, was presented at the 2018 ASPHO Conference in Pittsburgh, PA.

From 2008-2015, Dr. Hunger was the Chairman of the Children’s Oncology Group Acute Lymphoblastic Leukemia Disease Committee where he led the groundbreaking efforts to molecularly dissect pediatric leukemia and eventually unravel several molecular markers that helped stratify the disease and find targetable genetic lesions. Dr. Hunger has directed three major programs in pediatric hematology/oncology and all have prospered under his leadership.

Dr. Hunger is known for his vision for the future and deep understanding of where the field is headed, and for being an exemplary role model for trainees, junior faculty as well as many investigators.