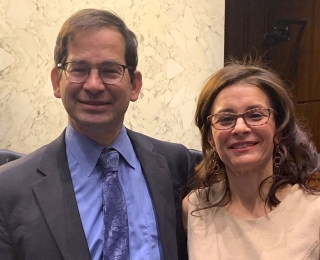 Jonathan Spergel, MD, PhD, and Lianne Mandelbaum, Founder of NoNut Traveler (Advocacy for Food Allergy Safety on flights) Our doctors aren’t just trying to create breakthroughs for our patients – we’re also working to make the world a safer place for everyone.

This week, Jonathan Spergel, MD. PhD, Chief of the Allergy Program at CHOP, went to Washington, D.C. to speak to Congressional staff about the importance of having epinephrine auto-injectors, commonly referred to as “EpiPens”, on planes. The meeting was spurred after Ashley Spencer, a Bucks County woman, suffered an anaphylactic episode midflight last year. She collapsed on the plane after eating some chips, asking someone to get her injectable before blacking out. Fortunately, there were two doctors on board who helped Ms. Spencer before the plane made an emergency landing.

“We’re potentially saving lives,” says Dr. Spergel. “It costs airlines very little to have epinephrine auto-injectors on board. For someone who’s struggling to breathe, mere seconds can make all the difference.”

Read more about his trip in this Bucks County Courier Times article.