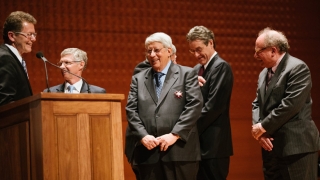 Since 1993, Children’s Hospital of Philadelphia has been working with the Open Medical Institute, a program of the America-Austria Foundation, in an effort to bring the knowledge and skills of CHOP’s renowned faculty to physicians from Eastern European countries. The clinicians spread knowledge to help their colleagues advance in their medical systems and keep them practicing in their home country. “It was an effort to promote ‘brain gain, not brain drain’,” says Stephen Ludwig, MD, Attending Physician in the Department of Pediatrics, who has been one of the leaders of the CHOP collaborative since it began. Recently, Dr. Ludwig received the Austrian Government Grand Decoration of Honor award, which was presented by the Austrian Ambassador and the Secretary General to the United Nations for his service.

In the early years, there was a significant knowledge gap between CHOP’s physicians and the course attendees. The case-based, interactive program is an intensive course where four to five CHOP faculty travel to Austria for a week and spend the week teaching in classrooms, and also share meals together and social time, as much of the richness of the experience comes in the non-teaching moments. The concept is to provide medical education as well as to form lasting relationships between the physician-attendees and CHOP. “We focus on areas that encompass many specialties and work to train medical leaders of the future,” says Dr. Ludwig.

Since 1993, CHOP has conducted more than 103 weeklong courses, but the structure of the courses has changed over time. More information is available now to these clinicians and the focus has transitioned to the implementation of knowledge. Communication between the CHOP and Austrian clinicians often continues long after the week is completed and long-lasting relationships have formed. Through a grant from the Leir Charitable Foundation, the lectures by CHOP faculty from each session are posted on CHOP’s Open-access Medical Education site as a free resource for providers around the world.

In addition to the decades-long program in Salzburg, Austria, the program has also expanded to other area in recent years including Mexico and Africa, and in the coming years will build on to CHOP’s existing relationships in Botswana, Ghana and Ethiopia.