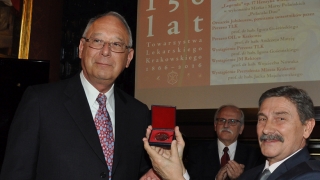 Dr.  Spray has served as a scientific consultant of the Department of Pediatric Cardiac Surgery at the Jagiellonian University (JU) for many years. The distinction bestowed upon him is a token of the University’s appreciation of long-term collaboration and expresses its gratitude for his many years of kindness and assistance.

“Dr. Spray has provided training for cardiac surgeons from Krakow at CHOP, and has actively collaborated in organizing international workshops held in Krakow for many years now,” said Prof. Janusz Skalski from JU. “Thanks to the involvement of Dr. Spray, Krakow has been visited by the most eminent specialists in management of congenital heart defects, and the workshops and conferences have been recognized among the most prestigious events of this kind in Europe. Owing to the collaboration with Dr. Spray, we can use the most modern technologies and surgical techniques here, in Krakow.”

Dr. Spray served as president of the American Association of Thoracic Surgeons and has authored more than 300 publications. He is a member of most prestigious American, European and world scientific associations, and considered one of the best cardiac surgeons in the world.

“You are our unattainable ideal, our paragon, teacher and guide,” said Prof. Skalski during the medal presentation. “Thank you very much indeed for your involvement. It is with a genuine satisfaction and pleasure I am proposing you for the Plus ratio quam vis award. This is also an exceptionally solemn moment for me and my team.”

The JU Rector honors persons distinguished for eminent services to the University with the Plus ratio quam vis commemorative medal. The motto Plus ratio quam vis (Reason before force) is inscribed on the portal leading from the Assembly Hall to the Copernicus Room. It is borrowed from the poem "Elegy" by the sixth-century poet Maximianus.

The first such medal, minted to commemorate the 600th anniversary of the University's revival by Queen Saint Jadwiga and King Vladislaus Jagiello, was presented to Pope John Paul II, an alumnus and honorary doctor of the Jagiellonian University. The maxim, included in the JU Statute, expresses the idea that has guided the oldest Polish higher education institution throughout its existence. It also reflects the moral bearing of the University in the face of historical challenges. The medal was also presented to numerous distinguished personalities, including Dr. James Dewey Watson, Nobel Prize Laureate in Physiology; Aníbal Cavaco Silva, economist and politician, and former prime minister and current president of Portugal; Valéry Giscard d'Estaing, politician and former president of France; as well as eminent scholars, and former rectors of the Jagiellonian University.