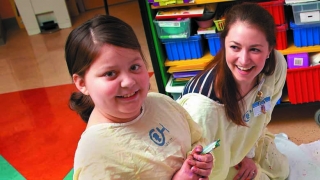 More than anything in the world, Vanessa Murillo loves to be with her family. At age 12, she is the youngest of five sisters, and when they are together, laughter pours out of the room. Vanessa’s expressive green-brown eyes dance as she says something mischievous — which happens a lot: Her mother, Gloria Orozco, just shakes her head and smiles. “As you can see, she’s a people person.”

It is difficult for any child to endure isolation in a hospital room, but for an outgoing personality like Vanessa, it is particularly tough. Last year she spent seven months straight at CHOP, virtually unable to leave her room for fear of getting a life-threatening infection.

What was it like? Vanessa doesn’t mince words: “Horrible.”

She also has lupus, a second autoimmune disease. A recent gift to CHOP from philanthropist Barbara Brodsky is helping to study Evans syndrome, the cause of which is currently unknown.

While Vanessa’s hematologists worked to manage her difficult disease, she spent weeks and months in isolation at CHOP. As the time dragged on, Vanessa increasingly turned to the one bright spot in her extended CHOP stay: the Child Life, Education and Creative Arts Therapy Department.

Art therapist Lindsay Ratushny, MA, ATR, and child life specialist Callie Helfrich worked hard to not only provide a sense of normalcy and childhood but also help Vanessa cope with the frustration of her confinement and illness.

Helfrich came to Vanessa’s room every day at 2 p.m., bringing toys, art supplies and activities. Together they decorated every inch of Vanessa’s room, including her door. It became a monthly ritual.

“If it was October, I would put pumpkins and leaves, and I would make the leaves stick out,” Vanessa explains. “If it was Christmas, I would make a Christmas tree and put beads to make it seem like it had lights.”

Child life specialists also help explain procedures at an age-appropriate level and often distract patients during uncomfortable ones. Their work, along with that of the art and music therapists, is entirely funded by philanthropic donations to CHOP.

When Vanessa couldn’t leave her room to attend fun patient events, Child Life brought the events to her. Though she couldn’t go to the Joshua Kahan Prom, Helfrich and Orozco brought a selection of prom gowns to Vanessa’s doorway.

While her mom chose traditional dresses, Vanessa instead selected a hot pink, one-shoulder sequined dress with feathers. (Never mind that it was about two feet too long.) Hair and nails done by volunteers, Vanessa sat in her dress all day and watched the prom on TV.

With an art therapist, who is a master’s-level clinician, art projects have a deeper purpose: to help a child cope with being in the Hospital. For example, in twice-weekly art therapy, Vanessa chose to write and illustrate a book about her hospital experience. As with many art therapy projects, the process can be more important than the product.

“Vanessa decided what she wanted her book to say and what was important to her,” says Ratushny, who is one of five art therapists at CHOP. “Talking about her experience and her family as she was creating her book gave her an outlet to express things like feeling sad that she was away from them and sharing happy memories.”

“Kids don’t have a lot of choices while they’re here at the hospital,” explains Ratushny. “And not having control over what is happening is a big source of stress. Opportunities for control are huge, and art therapy time is a time that they’re in charge.”

Vanessa’s illness is currently more stable, so she’s able to live at home, though she wears a mask and gloves when she’s around people. (Sometimes her sisters wear masks, too, in solidarity.)

She continues to develop her art. “She’s always had a thing for art,” says Vanessa’s 22-year-old sister, Jenn Gaitan, “but it’s really come out with all the art therapy and supplies available to her. She’s become really artistic, and it’s helped develop her personality.”