Perhaps you’ve heard about contaminated lettuce from Arizona or an outbreak of hepatitis A in the Midwest? With the smorgasbord of news thrown at us in a given week, day, or even hour, it can be easy to plan to find out more, and then get busy with something else. So if you are wondering how it could affect your family, or still have this on your “find-out-more” list, read on.

The story about romaine lettuce

As of April 30, more than 100 people were diagnosed with E. coli infections in 22 states. The outbreak began on April 20 and has been linked to contaminated romaine lettuce. 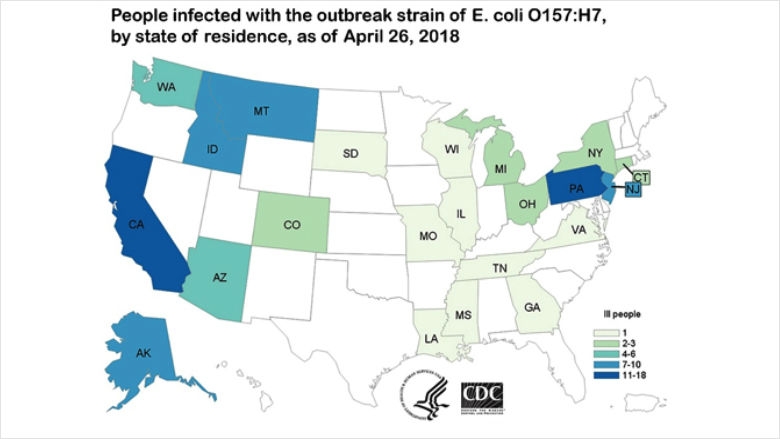 Escherichia coli (E. coli) is a form of bacteria. Many kinds of E. coli have been identified. Most are harmless. In fact, most people and animals have E. coli naturally occurring in their intestines as part of a healthy intestinal tract. However, some types of E. coli cause disease because they release a toxin called Shiga toxin. It is that toxin that makes people sick.

How is E. coli transmitted?

E. coli spreads when very small (usually invisible) amounts of human or animal feces are ingested. This can happen as a result of:

What are the symptoms of E. coli infection?

Symptoms include severe stomach cramps, diarrhea (often bloody), and vomiting. Severe illness can result in a type of kidney failure known as hemolytic uremic syndrome. Most people get better in 5 to 7 days.

Anyone can be infected with E. coli. However, children, elderly adults, and those with weakened immune systems are at greater risk for experiencing severe illness and complications.

How can I protect my family?

You can do several things to help prevent this infection:

Statewide hepatitis A outbreaks in Michigan and Kentucky are currently occurring. Citizens in Indiana have also been advised to take precautions. Likewise, travelers to those states should be aware of this situation. Since August 2016, more than 800 cases and 25 deaths have been reported in Michigan. More than 300 cases and three deaths have occurred in Kentucky since November 2017.

What is hepatitis A?

Hepatitis A is a virus that causes inflammation of the liver. Unlike hepatitis B and hepatitis C, hepatitis A infections are usually shorter and, therefore, do not typically lead to liver damage like cirrhosis or liver cancer.

How is hepatitis A transmitted?

Hepatitis A virus is spread when a person is exposed to very small (usually invisible) amounts of fecal matter that contain the virus, such as by ingestion of contaminated food or water. Uncooked or improperly cooked foods can be a source, as can foods handled by an infected person who did not wash their hands properly between using the restroom and preparing food. Less frequently, the virus can be transmitted through blood during the period someone is infectious, and through sexual contact, including oral and anal sex. Those who transmit the disease often do so without knowing they are infected, as symptoms can begin as late as two weeks after initial infection.

What are the symptoms of hepatitis A virus infection?

Individuals infected with hepatitis A can experience fever, nausea, vomiting, jaundice (a yellowing of the skin), dark-colored urine, abdominal pain, and lack of appetite. The infection typically lasts two months.

Because of varying levels of sanitation in other countries, hepatitis A is often considered a traveler’s disease; therefore, the hepatitis A vaccine is often thought of as a travel vaccine. However, because hepatitis A can spread via contaminated foods that are not cooked or properly washed, such as lettuce and onions, or by infected food handlers who do not properly wash their hands, people can be exposed without traveling to another country. Outbreaks in the U.S. have been linked to both contaminated foods and infected food handlers. For example, in 2016 separate outbreaks of hepatitis A were linked to frozen strawberries and raw scallops. Between 2016-2018, outbreaks in several states have been associated with populations of homeless persons and both injection and non-injection drug users.

How can I protect my family?

You can do several things to protect yourself and your family from hepatitis A: