When 8-year-old Emily Ruckle arrived at Children’s Hospital of Philadelphia, her condition was so severe doctors were unsure if her arm could be saved.

Emily had been the victim of a vicious dog attack, suffering multiple injuries to her right side including her arm and shoulder.

Thanks to the quick thinking of our team including Joy Collins, MD, trauma surgeon, Ines Lin, MD, hand surgeon and plastic surgeon, as well as many others, Emily was immediately brought in for emergency surgery. After several hours, it became clear that Emily’s arm could be saved, but a long road lay ahead of her. Just how much she would be able to use her arm was still unknown. 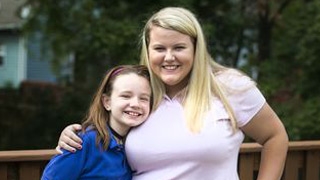 Emily (left) and her sister, Megan. (Photo: Kyle Grantham/The News Journal) In the two years since the accident, Emily has undergone a total of 12 surgeries, the most recent occurring in September 2016, which improved movement in her fingers and enabled her to make a fist.

Today, Emily attends occupational and aqua therapy, as well as taekwondo classes, to help her regain arm function. She continues to make breakthroughs every day and is back to being a kid again — playing her favorite video games and enjoying being 10 years old.

Watch the video to meet Emily and see how she’s doing today.

A three-part series in the Delaware News Journal documents the details of Emily’s journey, from the accident that changed the Ruckle family forever, to Emily’s life today.

Part 1: Mauling Sends Newark Eight-Year-Old On Journey to Save Her Arm

On September 27, 2014, a pit bull nearly ripped off Emily’s right arm in the basement of her home. Learn more about the initial decisions made by CHOP physicians that ultimately saved her arm.

In the first few months after the attack, Emily underwent many surgeries to improve her condition as doctors worked to repair her right arm and restore function in her right hand.

Learn more about her final surgery and Emily’s life today.