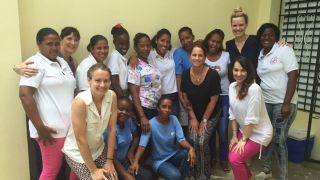 The Allies and Health Promoters took a smiling picture together at the end of a great week. Twice each year, a small team of CHOP employees travels to Consuelo, Dominican Republic, to spend a week at a primary care pediatric clinic called Niños Primeros en Salud (NPS). This clinic serves children younger than 5 years of age in six of the most underserved neighborhoods of Consuelo. NPS was opened through a partnership between CHOP and Centro de Salud Divina Providencia.

Health Promoters are local women, nominated to serve as health workers in their own communities because of their leadership skills and the exemplary health of their children. For the people living in the neighborhoods served by NPS, the Health Promoters are the first point of contact with the health system. Health Promoters follow groups of children and families to ensure that children are healthy or seeking care if not, and educate families on how to stay healthy. 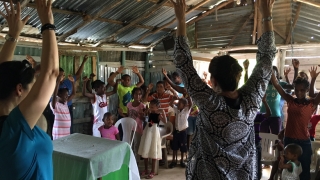 Allies taught several strategies for managing stress through breathing, one of which was known as “bird breathing.” During the June 2016 visit, five CHOP Global Health Allies worked with nine Health Promoters to address the issues that plague their communities most, including: stress, family and relationship health, mosquito-borne illnesses, general illness prevention, and nutrition. Allies gave lessons to healthcare workers related to each of these topics throughout their stay.

The CHOP team also made daily visits to community sites alongside the Health Promoters to deliver further education relating to these critical topics to community members themselves.

Following the educational talks and demonstrations, Allies and Health Promoters administered fluoride treatments to all children and adults present — for many their only source, as most Dominicans do not have access to water that has been treated with fluoride.

Special visits were made to the homes of seven young patients with developmental delays. The CHOP Allies shared information about therapeutic interventions caregivers could use to improve their children’s quality of life.

The impact of the Allies program is substantial — the June 2016 Allies’ education impacted the lives of at least 1,575 children and adults followed by Health Promoters in Consuelo. More likely though is that the health knowledge brought to these neighborhoods will spread even further, benefiting from a ripple effect from family to family in this vibrant community.