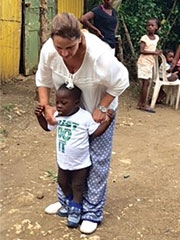 For four years, Milligan had been consulting with the CHOP Pincus Global Health fellows living in Consuelo to help a local boy named Danilo, who was born with Down syndrome. During that time, she worked from afar to share expertise she gained as a physical therapist for CHOP’s Trisomy 21 Program and as the mother of a now-13-year-old son with Down syndrome.

Leading up to the trip, Maria Dunn, DO, the current Pincus fellow, sent Milligan a videotape of Danilo, 4 1⁄2, barefoot, trying to walk.

“He was crying and crying,” Milligan says. “He would bear-crawl, but he didn’t have the strength or stability to walk. We sent suggestions. Some children with Down syndrome have sensitivities, and with the dirt and rocks on the ground, I thought that could be the reason he was having so much trouble. I thought, ‘I’d love to get orthotics and shoes for him.’”

Getting Danilo up and walking

Milligan approached the owner of Orthologix, John Izaak, who had a brother with Down syndrome, and he agreed to donate a pair of orthotics. Dunn took the necessary measurements and foot tracings, and Izaak finished the orthotics just in time for the trip. Milligan bought a few pairs of shoes for Danilo, too.

The group had a full schedule of educational sessions for the local health promoters affiliated with the CHOP-sponsored pediatric primary care clinic Niños Primeros en Salud (Kids First in Health) and participating in health fairs in low-resource neighborhoods around Consuelo. (Read more about the twice yearly trips.)

After Monday afternoon’s session, the team made their way to Danilo’s house. They woke Danilo up from a nap and put on socks, the orthotics and shoes.

“Right away, he stood up! We started walking down the path to show the neighbor who watches him. It was the most amazing feeling to see him really walking.”

Danilo’s father arrived and at first didn’t understand what was happening and that the shoes were a gift. Eventually, he warmed to the idea, especially when he saw how happy Danilo was walking around.

“He likes them,” the father said. In fact, usually orthotics are worn only a few hours a day at first, gradually increasing the time. But Danilo wouldn’t take them off. He didn’t get any blisters, as his feet were tough from going barefoot.

The CHOP team visited Danilo again the day before they departed. “He was standing in front of his house wearing his shoes, and he was smiling,” Milligan says. “For me, it was a really great trip because of seeing him standing and happy.”

Helping Danilo was one of many highlights of the weeklong trip, led by CHOP Global Health Center’s Adriana LaMonte, that also included training for health promoters on topics they had requested: managing stress, family and relationship health, mosquito-borne illnesses, general illness prevention, and nutrition.

Allies also went out to community sites each afternoon alongside the health promoters to deliver education relating to the week’s topics. Sessions, held at meeting places like churches and community centers, had at least 30 to 50 adults and children in attendance each day. Allies and health promoters also administered fluoride treatments to all the children and adults who came.

The group also went to the homes of seven young patients with developmental delays to determine appropriate therapeutic interventions that families can use to improve these children’s quality of life.