Read a case study from the Division of Nephrology about a 4-year-old boy presented to the Hypertension and Vascular Evaluation (HAVE) Program for a second opinion regarding hypertension.

His BP control was not optimal on amlodipine, and when seen he was on labetalol, enalapril, and HCTZ. He had no headaches, dizziness, leg pain with exercise, abdominal pain after eating, excessive sweating, or facial flushing. The paternal grandfather and several distant relatives have essential hypertension; otherwise there is no significant family history of kidney or cardiovascular disease.

On physical examination, height was 81st percentile and weight 90th percentile. His BP was 113/42 mmHg in the right upper extremity. He had no features of Williams syndrome or of neurofibromatosis I. There was a soft grade 1/6 SEM with regular cardiac rhythm. Femoral pulses were well felt. There was a soft bruit over the left renal artery; no other bruits were present.

A 24-hour ambulatory blood pressure monitoring (ABPM) study was done (Figure 1) at home. This showed elevated daytime and nighttime SBP with an inadequate nocturnal SBP dip. Because of the pattern of the abnormal initial lab results, the abnormal ABPM study, and the bruit heard over the left renal artery, an abdominal aortic angiogram was repeated. This showed severe stenosis (>80%) in a third order branch vessel to the inferior pole of the left kidney with delayed perfusion to the segment supplied by this vessel. This was successfully treated using percutaneous transluminal balloon angioplasty. There was minimal post-dilatation residual narrowing (Figure 2). The right renal artery, abdominal aorta, celiac axis, and mesenteric arteries were normal. 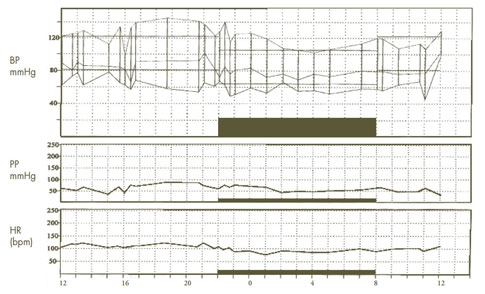 A: White arrow shows the stenosis; note the peripheral perfusion defect. B and C: Balloon dilatation of the artery with near normal caliber shown at conclusion of the procedure.

He was discharged the day after his procedure on enalapril 5 mg given twice daily, from which he was weaned off as an outpatient. As fibromuscular dysplasia (FMD) was the presumed diagnosis, he had an MRI of the neck and brain. Although the imaged vessels were normal, a large Chiari I malformation was found. He subsequently had this anomaly surgically corrected.

Discussion: Renal artery stenosis (RAS) accounts for up to 15% of hypertension diagnosed in prepubertal children. Findings that most suggest a diagnosis of RAS include stage 2 hypertension, an abdominal aortic or renal artery bruit, biochemical evidence of RAAS activation (hypokalemia, metabolic alkalosis, hyponatremia), and, in some instances, stigmata of specific syndromes associated with RAS.

In this child ABPM helped establish the severity of the hypertension while he was taking 3 anti-hypertensive medications. ABPM, a non-invasive technique for measuring multiple BP readings over a 24-hour period during regular activities and during sleep, has emerged as an increasingly important tool in the diagnosis and management of children with hypertension. ABPM is performed using an oscillometric Spacelab 90217 monitor. An appropriate-sized BP cuff is placed on the non-dominant arm and attached to a small monitor. For 24 hours, BP recordings are taken every 20 minutes while the patient is awake and every 30 minutes while he’s asleep. ABPM is considered satisfactory if there is a minimum of 40 readings during the 24 hours with at least 6 “sleep” readings.

Advantages of ABPM include the fact that measurements are made outside of the healthcare environment and the multiple parameters of BP assessed (mean 24-hour, daytime, and night-time SBP and DBP, BP load, nocturnal dipping, and BP variability). In the general adult population, nocturnal nondipping, nocturnal hypertension, and increased BP variability are predictive of cardiovascular morbidity and mortality. ABPM also permits diagnosis of masked hypertension (normal casual BP but ambulatory BP >95th percentile for sex and height). In adults, masked HTN has been associated with an increase in risk of sustained hypertension and cardiovascular morbidity. Children with chronic kidney disease (CKD) have a significant incidence of masked hypertension. Children should undergo ABPM if they have any of the following: persistent pre-hypertension, especially with comorbid cardiovascular risk factors; multiple providers report elevated BP readings but resting BP is normal in the clinic setting; solid organ transplant; or evidence of end-organ damage such as left ventricular hypertrophy.

To make a referral to or learn more about Nephrology, the Pediatric Stone Center and the Hypertension and Vascular Evaluation (HAVE) Program at CHOP, call 215-590-2449.