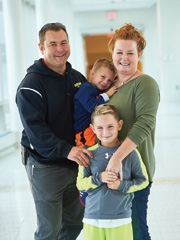 With two children with hemophilia — Kolbe, 3, and Liam, 7 — the Geiger family could have faced insurance limitations before the Affordable Care Act. March 2016 marked the sixth birthday of the Affordable Care Act (ACA), a.k.a. “Obamacare,” becoming law. While politics and controversy continue to rule the conversation about healthcare in the United States, it is important to remind ourselves of the extremely significant effect the law has had on the bleeding disorders community.

The official, full title of the ACA is the “Patient Protection and Affordable Care Act.” While the goal of using a shorthand title to make it more concise is understandable, an argument could be made that this deemphasizes the critical consumer protection components.

This came to light during a recent conversation I had with a parent of a child with hemophilia regarding the potential impact that repealing the ACA would have on her son’s future. I then reminded her of common practices by insurance companies that used to cause nightmares for patients with chronic disease but are now illegal under ACA protections.

According to the National Hemophilia Foundation website, the ACA included:

These game-changing aspects of the ACA dealt directly with the bottom line — getting, using and keeping coverage.

Gone are the days when insurance companies can deny or terminate policies because the patient needs significant care, has accumulated significant costs or already has a major diagnosis.

“Medical bankruptcy” and having to spend down assets until true poverty levels to then qualify for Medicaid after losing insurance are no longer commonly inevitable for those with bleeding disorders.

Health insurance challenges still undoubtedly remain, but there is no question that living with a bleeding disorder is far less of a catastrophic financial threat or burden than before the ACA became law.