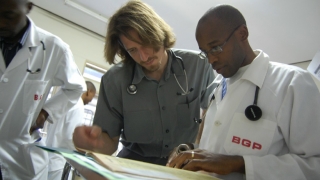 Photo credit: Ryan Littman-Quinn The health of children globally is impacted by many factors, and changing a single one has the potential to save thousands of lives. Many of the things that lead to illness and death in children around the world are simple to prevent and treat, but only when the proper resources are in place.

Diarrheal diseases are a perfect example of the contrast between children’s health outcomes in wealthy countries like the United States, and the experience of children elsewhere in the world. Most children in the U.S. will experience diarrhea in their early years and recover uneventfully. But in low- and middle-income countries, diarrhea can lead to serious consequences such as malnutrition, dehydration and even death. According to UNICEF, diarrheal diseases account for 9 percent of deaths of children under 5 worldwide, placing them among the leading threats to child survival.

Botswana, a country in Southern Africa with a population of just over 2 million, is no exception to this rule. According to the World Health Organization, diarrheal diseases account for 13 percent of all under-5 deaths in Botswana. 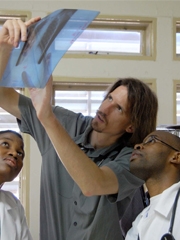 Photo credit: Ryan Littman-Quinn Henry Welch, MD, was working there in 2011 as a Children’s Hospital of Philadelphia (CHOP) David N. Pincus Global Health Fellow, a fellowship offered by the Global Health Center at CHOP. He was shocked by the number of children with diarrhea being admitted to Nyangabgwe Referral Hospital in Francistown, Botswana. “I was struck both by how many children were admitted with diarrhea and how sick they were — some even died,” says Dr. Welch. “We needed to find out more to try to improve the situation.”

Welch developed a prospective study. He enrolled children who were admitted with severe acute gastroenteritis (diarrhea or vomiting) to Botswana’s two largest hospitals — Princess Marina Hospital (PMH) in Gaborone and Nyangabgwe Referral Hospital (NRH) in Francistown. Working with colleagues from Botswana’s Ministry of Health, McMaster University in Canada, the Botswana-UPenn Partnership and CHOP, the study team analyzed patient stool samples to determine which pathogens were causing diarrhea in their young patients.

The results showed that 78 percent of children admitted with diarrhea between June and October 2011 were positive for rotavirus, a contagious virus that can cause gastroenteritis. Throughout the African continent, rotavirus is the most common cause for pediatric hospitalizations; it accounts for 40 percent of all hospital admissions for children under 5 due to gastroenteritis. Welch’s study provided compelling evidence that rotavirus, a vaccine-preventable illness, was contributing significantly to both childhood morbidity and mortality in Botswana.

“The impact of rotavirus alone was more profound than we expected,” says Welch, “And we immediately shared the results with policy-maker colleagues in Botswana’s Ministry of Health.”

In a follow-up study published in 2016, researchers from Botswana’s Ministry of Health, the CDC, Canada and CHOP revealed the powerful public health impact of introducing the rotavirus vaccine. In 2013 and 2014, the first two years after the vaccine was introduced, there were significant declines in both hospitalizations and deaths from childhood gastroenteritis. These declines were most prominent during Botswana’s rotavirus season (May – October) and among infants under 1 year of age who are the most vulnerable to the complications of rotavirus disease. The team reported a 43 percent reduction in gastroenteritis hospitalizations and a 48 percent reduction in gastroenteritis deaths.

“Research that influences policy to save lives is what CHOP’s Global Health Center aims to do wherever we work,” says Dr. Andrew Steenhoff, Medical Director of the CHOP Global Health Center. “We take on important local challenges in partnership with local leaders, discover evidence-based solutions together, help implement these and then measure the lives saved.”

“This has been an inspiring, impactful seven-year journey where an initial philanthropy-funded study led by CHOP Global Health’s David N. Pincus Fellow in close collaboration with Botswana’s Ministry of Health helped influence policy at a national level, leading to the early introduction of a life-saving vaccine,” adds Steenhoff.

CHOP’s Global Health Center works in more than 15 countries around the world. Research that saves children’s lives cannot happen without the support of philanthropy. You can help CHOP researchers discover high-impact, locally relevant global health solutions with a donation to our program.

UNICEF. “Diarrhea remains a leading killer of young children, despite the availability of a simple treatment solution.” Feb. 27, 2017

Categories: In the Community, Global Health