Published on Jan 30, 2018 in Breakthrough Report 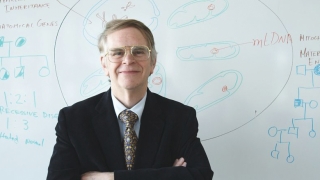 As a young researcher in the 1970s, Douglas C. Wallace, PhD, had an insatiable curiosity about mitochondria, the “power plants” in each cell, and specifically the DNA in mitochondria. While everyone else was concentrating on DNA in the nucleus of cells, he zeroed in on mitochondrial DNA (mtDNA).

Dr. Wallace’s unrelenting research into mitochondrial genetics and the role mtDNA plays in disease earned him the unofficial title of the founder of mitochondrial genetics and, in 2017, two international awards. As Director of the Center for Mitochondrial and Epigenomic Medicine at Children's Hospital of Philadelphia (CHOP), Dr. Wallace received the Benjamin Franklin Medal in Life Science in May and the Dr. Paul Janssen Award for Biomedical Research in September.

Both prestigious awards have been stepping stones to the Nobel Prize for some past recipients, as has the Gruber Genetics Prize, which Dr. Wallace won in 2012. In 2016, Dr. Wallace was inducted into the Italian Academy of Sciences in Rome, joining luminaries such as Albert Einstein, Benjamin Franklin and Louis Pasteur.

Dr. Wallace’s groundbreaking research defined the genetics of DNA within the mitochondria. Mitochondria are tiny structures within cells that produce 90 percent of our energy, playing essential roles in health and disease. His studies have reconstructed patterns of human evolution and worldwide migrations over hundreds of millennia. His investigations into the role of mitochondrial DNA mutations in human disease are an important component of CHOP’s Roberts Collaborative for Genetics and Individualized Medicine, launched in 2016.

His discoveries laid the groundwork for a new Frontier program at CHOP — the Mitochondrial Medicine Program — which strives to improve the lives of children with mitochondrial disease. The program is creating new diagnostic tests to pinpoint a child’s particular illness and finding new therapies to treat it.

“Dr. Wallace was the first to understand the power that mitochondrial genetics could bring to the study of human disease,” says David Julius, PhD, professor and Chair of the Department of Physiology, University of California, San Francisco, and Chair of the 2017 selection committee. “It’s great to recognize Dr. Wallace for his unique and groundbreaking research that has spanned nearly four decades.”

For Dr. Wallace, the award further legitimizes his idea “that there are alternative ways to look at the disease process, and with those alternative approaches, we can understand much more complex diseases and have the chance to help a lot more people.” Dr. Wallace feels a special kinship to Janssen, as he explains in a video acknowledging the award.

The award citation accompanying the Medal acknowledged Dr. Wallace’s achievements in showing the profound role of mutated mitochondrial DNA in complex diseases, “thereby leading the way to therapies for those diseases and aging.” The Franklin Institute produced a brief video of Dr. Wallace highlighting his work.