JM is a 14-year-old male referred to CHOP’s Division of General, Thoracic and Fetal Surgery for progression of a chest wall abnormality. The family reports the abnormality was noted many years ago, but seemed to progress significantly over the 6 months prior to his visit. The progression correlated with an overall growth spurt. JM complains of occasional pain along his sternal border and occasional shortness of breath, both of which he attributes to his pectus deformity. JM otherwise participates freely in activities and sports. He does, however, try to avoid situations in which he may need to remove his shirt (eg, the beach).

JM’s presentation is fairly classical, worsening in early adolescence when puberty begins and there is rapid somatic growth. Pectus abnormalities are thought to be a growth-related phenomenon and thus worsen with growth. In late adolescence, when skeletal maturity is reached, these deformities typically stabilize as the cartilage stiffens. The growth rate of the cartilage relative to bony thorax drives the abnormality.

JM’s deformity will likely worsen, given his age. When considering optimal timing for surgical intervention, it is a balance between allowing some growth and intervening before the cartilage calcifies and stiffens—typically between the 13th and 16th year. Consult with cardiology and/or pulmonary if there is concern that symptoms are due to a cause other than the sternal deformity. Only in those cases are pulmonary function tests (to look for restrictive lung disease) or an ECHO (to look for cardiac compression and to exclude cardiac source for chest pain) a necessity. In a patient contemplating surgery, obtain a noncontrast CT scan of the chest to evaluate the relative anatomic positions of the intrathoracic organs as well as to calculate a pectus index (ratio of the transverse to AP diameter of the thorax as measured at the point of maximal depression of the sternum, also referred to as the Haller index). (See Figure A.) An index above 3.25 is considered abnormal. Before surgery, perform allergy testing to metals (nickel, cobalt) to minimize risk of a reaction to the stainless steel implant. Allergic patients can have a custom bent titanium bar inserted. 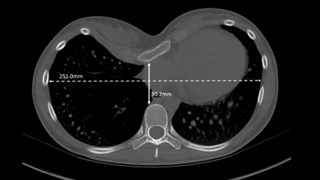 Figure A: CT image at point of maximal depression of the sternum. Pectus index calculated as ratio of transthoracic diameter to AP diameter [251/50.2=5.0]

Surgical intervention is typically reserved for those with moderate to severe deformities (pectus index >3.25) as well as evidence of functional impairment such as compression of the right ventricle (by CT or ECHO), restrictive lung disease or exercise intolerance. The two main approaches to surgical correction of pectus excavatum are the Ravitch procedure (open) or Nuss procedure (minimally invasive). The Nuss procedure is now more common, except in cases of a very deep deformity (increasing the risk of cardiac injury) or significant torsion or sternum asymmetry.

The Ravitch procedure involves an anterior transverse incision, mobilization of the pectoralis muscles, and excision of the affected cartilaginous segments. A temporary bar is placed to support the sternum during healing. This bar is removed 6 to 12 months after the original repair. The Nuss procedure involves the insertion, through small lateral incisions and with thoracoscopic guidance, of a custom bent stainless steel bar beneath the sternum. Once inserted, the bar is flipped such that the convexity elevates the sternum into a normal position (see Figure B). Over time, the cartilage remodels such that at removal (3 years later, usually in a day-surgery setting), the repair is stable. 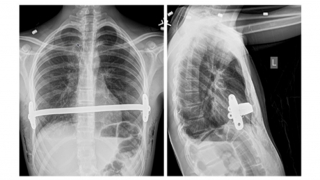 Both procedures are major propositions and typically involve a hospital stay of 4 to 7 days, depending on peri-operative pain management needs. Post-op activities are limited for several weeks to several months. Some clinicians will limit the vigorous contact sports (eg, hockey, football) while the bar is in place, but allow other sports and activities once healing is complete (3 months). Results for both procedures are reported as good to excellent in >95% of patients. Primary failure is unusual. The Nuss procedure has the cosmetic advantage of avoiding an anterior scar.