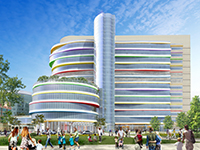 June 25, 2013 — The Philadelphia Inquirer featured a front page story on June 25, 2013, about CHOP’s largest gift ever: $50 million toward the cost of an outpatient center rising on the institution's University City campus.

The family gift, made by Alan and Constance Buerger, Reid and Krista Buerger, and Grant Buerger, marks a milestone in the Hospital's $100 million capital campaign to fund the new outpatient facility.