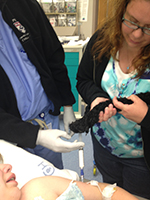 September 8, 2013 — When 12-year-old Ashley arrived at the gastroenterology suite to have two procedures performed while under general anesthesia, she was accompanied by both her mother and her service dog, Finn, which provided her with emotional support for her anxiety over medical visits and procedures. Ashley has autism spectrum disorder (ASD) and severe anxiety, amongst several other medical ailments.

The nurses, technical staff, and anesthesiology team agreed to have the service dog in the room to make Ashley feel more comfortable. However, Ashley became extremely upset when the team began to administer the anesthesia, and she requested that this task be performed by her service dog. As reported in a recent issue of the Journal of Anesthesia and Analgesia, Ronald S. Litman, DO, allowed Finn to place his paw over the syringe administered to Ashley.

Read the story in the Philadelphia Inquirer.