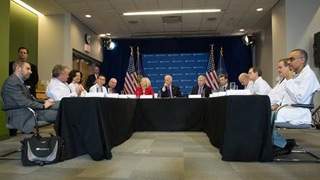 During President Obama’s State of the Union Address (SOTU), he announced a new effort to fight cancer to be led by Vice President Joseph Biden, who lost his son to cancer last year. This initiative, coupled with Congress increased investment in the National Institutes of Health and passage of the 21st Century Cures Act, will position The Children's Hospital of Philadelphia and others to accelerate the development of even more breakthroughs that will save lives for generations to come.

Just days after the SOTU, Vice President Biden visited Penn Medicine’s Abramson Cancer Center to meet with researchers, including CHOP’s Stephan Grupp, MD, PhD, to officially launch the initiative. This announcement was followed by a half-day “cancer summit” in Philadelphia called “Cancer Precision Medicine—Big Ideas in Research, Treatment and Prevention," which was kicked off by Dr. Grupp who told the story of Emily Whitehead, a young girl with leukemia who was successfully treated at CHOP by a process that genetically engineered her own T-cells to attack her cancer cells.