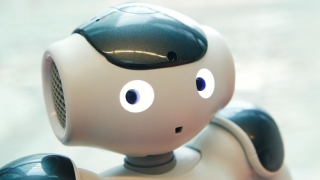 It sings. It dances. It shakes kids’ hands and says their names. And once a week, it scoots into Children's Hospital of Philadelphia’s (CHOP) Seacrest Studios, a microphone clipped to its plastic body, and co-hosts a game of bingo.

Meet NAO (pronounced “now”), a 2-foot-tall robot that has wowed dozens of CHOP patients and families with its intelligence and charm.

“I was created in Paris,” it says during a break between bingo games, its blue eyes flashing, “Fly Eagles Fly” wristbands dangling from its left arm. “I can recognize your face, answer your questions, play music, grab objects and even play soccer like a pro!”

“NAO makes people feel more comfortable,” says Eric Newby, patient media program specialist in the Child Life, Education and Creative Arts Therapy Department. “It’s friendly and upbeat, and it works well with patients who may have some anxiety or fear about being in the hospital.” 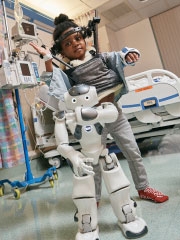 Nala, 3, had fun dancing with NAO during a recent inpatient stay at CHOP. With a little programming help from developers on the hospital’s Information Services (IS) team, CHOP’s three NAO robots — one of which was made possible through a generous gift from the Kids-N-Hope Foundation, which contributes more than $100,000 to CHOP each year — could make the hospital an even more welcoming place. In the future, the team hopes, the robots will greet patients when they arrive, offering directions to appointments and other helpful information in English, Arabic or Mandarin Chinese. They will cheer patients on during physical therapy appointments, demonstrating exercises in a fun, playful way. They will visit with children in their hospital rooms and show them what to expect during medical procedures and IV insertions. They will be there for patients during scary moments and sad ones, making them laugh and easing their fears.

The team is especially excited about an opportunity they’ve just begun to explore: using NAO to teach kids computer programming. “Kids could use their time in the hospital to engage in something that might be a current interest or a future career opportunity,” says Stephanie Brennan, strategic operations manager in Child Life, Education and Creative Arts Therapy. “That’s therapeutic in and of itself.”

Adds Karl Schmid, an IS staff member who helps program NAO: “Every time I’ve seen NAO with patients and families, they want to get involved with it and see what it can do. It takes them out of the mindset of being in the hospital — it’s something that’s cool and exciting.”