Read a case study from the Division of Physical Medicine and Rehabilitation about a 5-year-old male who tripped and fell in gym class, his diagnosis of left thalamic stroke, and the cause of the sudden injury.

A 5-year-old male tripped and fell in his gym class at school while chasing a ball on October 8, 2013. He hit his head on bleachers. He did not lose consciousness, but was reportedly dazed when he saw the school nurse. No formal diagnostic work-up or treatment was initiated at that time. On October 15, his mother noticed that he suddenly looked tired, that the right side of his face was drooped, that he staggered when he walked and that he had difficulty responding verbally to her. He was taken promptly to a hospital on October 16. A MRI/MRA of the brain revealed a left thalamic stroke (see photo). A C-spine MRI showed C1-C2 and C4-C5 ligamentous injury for which he was placed in a cervical collar for 6 weeks. He was admitted to an inpatient rehabilitation unit on October 22. 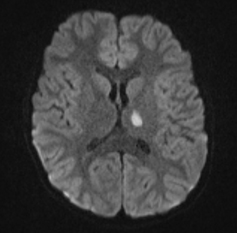 Discussion: The cause of this child’s sudden stroke was vertebral artery dissection (VAD). Stroke as a consequence of VAD has been only infrequently reported in children. In a significant percentage of cases, a temporal relationship between trivial neck or head trauma and the subsequent development of VAD has been identified. There is typically a history of neck hyperextension with torsion. In the review of VAD in children by Couldwell and associates, the majority of children presented with a combination of signs and symptoms, including eye signs or symptoms (72%), paresis/paralysis of 1 or more extremities (54%), ataxia (53%), headache (38%), and vomiting (34%). Interestingly, neck pain, a hallmark symptom of VAD in adults, was noted in only 12% of these children with VAD.

Angiography was the most common imaging study (93%) used to diagnose the VAD in these patients. Noninvasive imaging studies, such as brain MRI with magnetic resonance angiography (MRA) and cranial CT with computed tomography angiography (CTA), have supplanted conventional angiography in the diagnosis of cervicocephalic dissection. Conventional angiography, however, is used in younger patients when clinical suspicion of arterial dissection is high despite negative findings on the noninvasive studies. In the Couldwell study, boys outnumbered girls by a ratio of 6.6:1. In contrast, in the adult population the ratio is 1.3:1.

Arterial dissection occurs when the arterial walls are separated by hemorrhage. This creates a false lumen in the space where blood seeps into the vessel wall, causing a change in blood flow turbulence resulting in thrombotic stenosis or occlusion at the site of injury. This results in ischemic stroke(s) and associated neurologic sequelae. Although cerebral ischemia can be due to hypoperfusion, it is most commonly the result of thromboembolism. Prognosis is dependent on the clinical status at presentation, the degree of subsequent recanalization, and the time to onset of treatment.

Early initiation of treatment results in more successful thrombolytic reversal of thrombotic occlusions. Intravenous fibrinolytic therapy within the first 3 hours of an ischemic stroke onset has more favorable outcomes, while treatment after 4.5 hours has demonstrated no net benefit. Subsequent treatment of VAD after the acute phase is controversial but includes antiplatelet or anticoagulation therapy.

Children who have a stroke secondary to a vertebral artery dissection may develop significant focal neurologic deficits. This child’s most prominent residual deficits included motor incoordination,right sided weakness, right hemisensory impairment, and expressive language deficits. He showed significant functional improvement in response to comprehensive inpatient rehabilitation therapies, which included exercises and activities to improve his gait, strength, endurance, balance, coordination, dexterity, and communication skills. He is expected to show continuing incremental improvement with ongoing rehabilitation therapy in the outpatient clinic setting, but he remains at risk for lasting neurocognitive deficits and behavioral dysfunction. He was directed to avoid contact sports and high-speed amusement park rides. His Lovenox was discontinued following his inpatient rehabilitation course, and he was instituted on aspirin 81 mg daily for secondary stroke prevention, which he will remain on for at least 2 years following his initial presentation. He will undergo a brain MRI and a head and neck MRA at 2 years following his stroke.

It is postulated that the incidence of VAD in children is likely underestimated and inadequately recognized. VAD should be included in the differential diagnosis of ischemic strokes in children, particularly when the child has experienced preceding head or neck trauma, even if seemingly trivial.