Some of the same gene mutations that cause heart defects in children also lead to neurodevelopmental delays, including learning disabilities. A large study of congenital heart disease (CHD) reveals overlapping genetic influences during early childhood development. 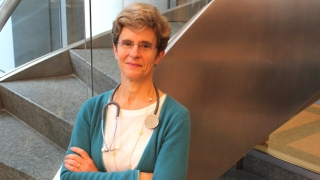 Elizabeth Goldmuntz, MD “This research suggests that among infants with heart disease, we may be able to identify those at higher risk for neurodevelopmental problems, and to intervene earlier with therapy during a crucial stage of brain development,” said study co-author and pediatric cardiologist Elizabeth Goldmuntz, MD, of The Children’s Hospital of Philadelphia (CHOP). She added that follow-up research must be done before the findings could be used in early screening tests.

The collaborative federally sponsored study, with authors from Mt. Sinai Hospital, Yale, Harvard, and Columbia Universities, and other centers, appeared in the Dec. 4 issue of the journal Science.

Occurring in nearly 40,000 births each year, CHD is the most common birth defect in the U.S., and includes a variety of heart conditions with a broad range of severity. The new study analyzed DNA from over 1,200 CHD patients, along with DNA from their parents. Some of the children had isolated heart disease, some also had neurodevelopmental delays, and a third group had CHD plus a birth defect in another organ.

Researchers have long known that a significant group of children with CHD have neurodevelopmental delays, often detected after they begin school. Some of these neurodevelopmental problems have been attributed to abnormal prenatal blood flow stemming from the original heart defect, and to the side effects from life-saving surgical and medical interventions during infancy.

However, said Goldmuntz, “over the years, all those non-genetic factors couldn’t fully explain the neurological disabilities in these patients. This new study supports what many of us suspected—that some genes control both heart and brain development.”

Goldmuntz, who has studied the genetic basis of congenital heart defects for the past 20 years, was the principal investigator at CHOP within the Pediatric Cardiac Genomics Consortium, established by the National Heart, Lung and Blood Institute. CHOP provided data for nearly one quarter of the children with CHD in this study.

The study team focused on “de novo” damaging mutations, those not found in the parents, but occurring first in a child. These mutations, found within the exome — the portion of DNA that carries codes for proteins — are predicted to alter protein function. The research found that these damaging de novo mutations occurred in 6 to 20 percent of children with CHD and other birth defects, but in only 2 percent of children with isolated CHD.

Moreover, said Goldmuntz, “this was not a random group of genes. They were genes that regulate gene transcription and chromatin remodeling, two biological processes that play key roles in early development by affecting whether other genes become active.” Ultimately, she added, these genes act on biological pathways that might eventually be targeted with specific drugs, but such targeted therapies will require further research.

In all, the study team discovered 21 genes harboring protein-damaging mutations in more than one patient, and many other genes each in just one patient having a damaging mutation. Goldmuntz expects many more genes will be discovered that contribute to CHD, either in isolation or in combination with other developmental defects. In the meantime, said Goldmuntz, she and other cardiology researchers continue to face “the challenge of translation,” applying genetic findings to clinical treatments.

The National Institutes of Health provided grant support for this study. In addition to her CHOP position, Goldmuntz also is a professor of Pediatrics in the Perelman School of Medicine at the University of Pennsylvania.

Among the authors contributing to this study is cardiothoracic surgeon J. William Gaynor, MD, director of CHOP’s Fetal Neuroprotection and Plasticity Program, and a nationally prominent expert on neurodevelopmental outcomes in children with CHD.