A recent study led by pediatric surgeons at Children’s Hospital of Philadelphia’s Division of General, Thoracic and Fetal Surgery has found that it is safe and cost effective to discharge healthy children who undergo laparoscopic appendectomy for non-perforated appendicitis on the same day of the operation after a short period of observation.

According to the study — which was published in the March 2021 issue of the journal Pediatric Surgery International — same-day discharge (SDD) of these patients does not result in more postoperative emergency department (ED) visits or hospital readmissions. In addition, there is a significant financial benefit when patients are discharged early.

Laparoscopic appendectomy is a relatively quick operation with an exceptionally short recovery time in children. Children who undergo this procedure for non-perforated appendicitis typically recover quickly and are discharged home after an overnight hospital stay. With the ever-increasing adoption of early recovery after surgery pathways, and multiple studies showing the feasibility of SDD after laparoscopic appendectomies in adults, recent progress has been made towards SDD in the pediatric population for early appendicitis.

The aim of this IRB-approved single-center study was to evaluate the results of the SDD strategy at Children’s Hospital of Philadelphia (CHOP) in a large cohort of children with non-perforated appendicitis, focusing on clinical outcomes as well as on the hospital charges. Study leaders reviewed the medical records of 1,441 patients who underwent a laparoscopic appendectomy for non-perforated appendicitis at CHOP between July 2015 and June 2019.

Study findings and benefits of SDD

A retrospective chart review comparing postoperative (30-day) ED visits, hospital readmissions, and reoperations of patients in these two groups found no significant differences between patients discharged shortly after the operation and patients who remained in the hospital for an overnight observation.

Additionally, the study found that the SDD approach is associated with a significant reduction in hospital charges. The study authors note that while this may not be as relevant as their clinical findings, it is not to be neglected in the current context of ever-increasing healthcare costs.

In addition, more hospital beds remain available for patients who are more critical, which is significant given hospitals frequently operate at or above capacity. The data from the study revealed that the SDD strategy saved about 125 bed days per year, a number that could be much higher if more surgeons felt comfortable with the SDD approach for eligible cases.

In summary, this study provides evidence that same-day discharge for children after a laparoscopic appendectomy for non-perforated appendicitis is an appropriate management strategy, not only from a clinical perspective but also from a financial standpoint.

Pediatric general surgeons at Children’s Hospital of Philadelphia are available to consult on second opinion requests. 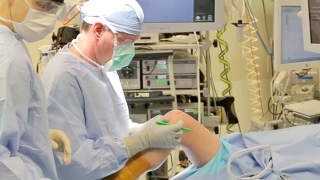 Study led by CHOP physicians found half of pediatric patients who were screened had no symptoms, and infection rates among children varied greatly.