Published on Nov 12, 2014 in International Update

Few programs in pediatric healthcare have grown as quickly as CHOP International Medicine, which has cared for patients from more than 95 countries since it was founded four years ago. The program links families to CHOP’s world-renowned experts in dozens of specialties, making it possible for international patients to receive medical care and treatments that may not be available in their home countries. 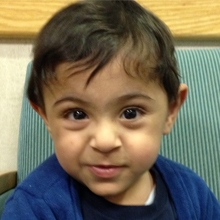 In late April, the International Patient Services team within International Medicine welcomed CHOP’s 1,500th international patient, 22-month-old Abdulrahman Alotaibi. Born in Kuwait at just 25 weeks’ gestation, Abdulrahman suffered from many complex medical issues, including retinopathy of prematurity, pulmonary hypertension, feeding and swallowing problems, chronic lung disease, and gastroesophageal reflux disease. He needed the most advanced care in the world, and a friend told his parents, Huda and Bader, that they could find it at CHOP.  “She told us it was a good hospital and that the doctors are excellent,” says Huda. “She said, ‘It will feel like home.’”

Within a week of the family’s arrival at CHOP, Abdulrahman’s medical team, which included specialists from pulmonary medicine, ophthalmology, gastroenterology, nutrition, speech and occupational therapy, and other disciplines, had weaned him off the supplemental oxygen he had relied on to breathe for many months. The team also discovered that Abdulrahman had aspiration pneumonitis, a condition that occurs when foreign matter, such as food or liquids, is inhaled into the lungs. They adjusted Abdulrahman’s feeding plan to address the problem – and soon, he was thriving.

Like all CHOP patients, Abdulrahman benefited greatly from the Hospital’s multidisciplinary, family-centered approach to care – and from the expertise of its world-renowned specialists, many of whom are pioneers in their fields. The members of his medical team worked together to develop a care plan that addressed all of his medical needs – and made sure that Huda and Bader had all the information they needed to make the best decisions about their son’s care. ”They really educated us,” says Huda. “We were very happy with the care they gave.”

Prior to their arrival at CHOP, and throughout their stay in Philadelphia, Abdulrahman’s family also received assistance from CHOP’s professional medical interpreters and members of CHOP’s multilingual International Patient Services team, who coordinate patients’ medical care and make sure each family’s experience is as comfortable as possible. “Whatever we needed, they would do. Anything we asked for, they would arrange — even if it wasn’t about Abdulrahman,” says Huda.

In the weeks after he was discharged from CHOP, Abdulrahman stayed with his parents at an apartment in Philadelphia and returned to the Hospital for follow-up appointments with the feeding team, his occupational therapists and other clinicians. In early July, he and his parents returned to Kuwait.

Now a cheerful 2-year-old who loves to clap his hands and go outside, Abdulrahman came a long way during his short time at CHOP — and his family couldn’t be happier.

Says his dad: “We will recommend CHOP to anyone with a pediatric health problem.”