Evan Lindberg was only 7 years old when his parents, Wendy and Gavin, lost him to neuroblastoma. Today, they are making sure his spirit lives on in their advocacy work through the EVAN Foundation.

He was a dinosaur fanatic and a tee-ball player. He had a huge heart and a bigger smile. He was brimming with potential and love for everyone around him. 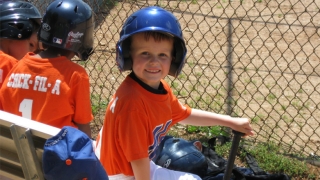 He was also a cancer patient for most of his life, fighting a four-year battle with stage IV, high-risk, relapsed neuroblastoma. Evan Lindberg was only 7 years old when his parents, Wendy and Gavin, lost him. And today, they are making sure his spirit lives on in their work.

It was 2006 when 3-year-old Evan, “won the worst lottery he could win,” says Gavin, describing the shock of learning that his only child had a rare childhood cancer called neuroblastoma. Neuroblastoma is a tumor of nerve tissue that develops in infants and children and typically presents in the adrenal gland.

Approximately 700 new patients are diagnosed each year in the United States, half of which are high-risk, stage IV cases. When Evan was diagnosed, the aggressive cancer had already spread all over his body.

The Lindbergs, who live in Germantown, MD, were just a few hours drive from some of the best hospitals in the country for children with high-risk neuroblastoma. They spent four years traveling up and down the East Coast for treatment, making themselves familiar with all the experts in the field and exploring every available clinical trial.

The path to CHOP's experts

Their search for more treatment options eventually led them to Yael Mossé, MD, a world-renowned neuroblastoma expert at the Center for Childhood Cancer Research at The Children’s Hospital of Philadelphia.

Dr. Moss é had recently discovered that a mutation in a gene called ALK drives growth in a small subset of neuroblastoma tumors. She had a sample from Evan’s tumor analyzed, and found that he tested positive for the mutation. In early 2010, Evan became one of the first patients enrolled in a new clinical trial launched by Dr. Mossé using a drug that targets ALK. It was the fifth experimental therapy Evan had received.

“When you’re in the awful world of pediatric cancer, hope is everything,” says Wendy. “If it wasn’t for the work being done at CHOP, we would have been completely out of options.”

The experimental therapy was not effective, however, in reaching and killing the tumor cells that had spread to Evan’s brain. He passed away in October 2010.

Even after losing their son, Wendy and Gavin weren’t ready to stop their personal battle. The experience they’d had with Evan opened their eyes to a critical issue they couldn’t ignore.

“Something always struck me when talking with researchers,” says Gavin. “They had a seemingly endless list of great ideas they believed held promise for treating neuroblastoma but they were frequently unable to pursue them because of the limited funding available for pediatric cancer research.”

The Lindbergs were dismayed to learn that only 4 percent of the National Cancer Institute’s $5.1 billion annual research budget is dedicated to pediatric cancer. So less than a year after his death, they founded The Evan’s Victory Against Neuroblastoma Foundation (EVAN Foundation), an organization dedicated to supporting neuroblastoma research and patient wellness.

“In the case of Evan and every child who loses their battle, you can’t help but think of the years lost,” says Wendy. “It is remarkable and sad and pathetic. If the government isn’t going to provide the resources necessary to fight this fight and win back those years, then it’s up to us.”

Gavin adds, “Talk to anyone in the pediatric oncology research community, and they will tell you it’s the support of nonprofit patient organizations that frequently determines whether or not new areas of research and clinical trials are pursued. As a result, it’s foundations like ours that have the potential to make a huge difference.”

The Lindbergs hope to inspire others to rally around this cause.

“If you are thinking about doing something to help kids with cancer, whether it’s creating a new organization or supporting one already in existence, just do it. Don’t wait," Wendy says. "The truth is there is no time to waste. Every day is an opportunity.”

And a huge benefit for Wendy and Gavin is the daily reminders of the reason they committed themselves to this.

“The work we do lets us feel that deep connection to Evan every day, even though he isn’t physically here with us. He was brave and strong and determined, so we will be too.”

The EVAN Foundation provided $50,000 in neuroblastoma research grants in 2012, its first full year in operation. One of those grants went to Dr. Mossé for a project entitled, “Molecular Oncology for Pediatric Cancers: Neuroblastoma as a Model.”