Frustration and fear led Max’s parents to bring him to Children’s Hospital of Philadelphia. “We couldn’t get answers in California,” says Max’s mom, Jessica. “We knew we’d be in good hands at CHOP.”

When Max was 5 weeks old, 97 percent of his pancreas was removed.

After a difficult few months, during which Jessica and Larry fed Max every three hours day and night, they began giving him continuous dextrose through a G-tube at night. “Then we were all able to sleep through the night for the first time,” she says.

Max was also taking octreotide, a low dose of growth hormone. Little by little, they lowered the dose of dextrose. He stopped taking octreotide. Today, at 5, his HI is managed completely by diet.

"So much better now" after HI surgery 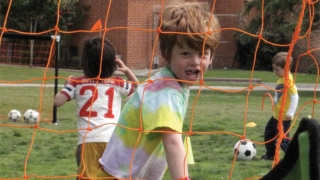 Max is active in sports and is already reading and doing arithmetic.

“This is the best I could have hoped for in the scary days,” his mother says.

“His sugar levels are still unpredictable. He’ll eat the same meal and his body will react differently” because what’s left of his pancreas still produces varying amounts of insulin. “You can’t really let your guard down fully.”

Down the road, Max may require insulin.

“I don’t worry about it,” Jessica says. “It’s so much better now than it was. And in five or 10 years, who knows what advancements in treatment they’ll find?”